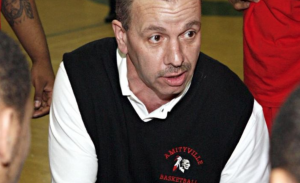 Jack Agostino began coaching at Amityville High School in 1987 at the age of 24, one of the youngest varsity coaches in Suffolk County at the time.

He has been named county, state and Newsday “Coach of the Year” numerous times.

In 2004 he earned career victory No. 300, and was one of the youngest coaches to reach this plateau in New York history.

In addition, Jack is a special education teacher and he has received several awards for his community service activity in Amityville.

In 2017, after retiring from Amityville, he began coaching at the collegiate level at Carolina College as an assistant under one of his former players.