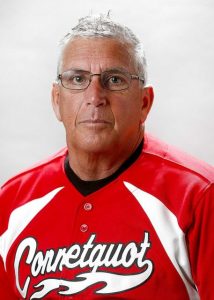 Coach Ambrosini began coaching at Connetquot in 1982. He has won more than 600 games and was the winningest coach in Suffolk County baseball history upon his retirement.

He has been named league coach of the year 17 times and Suffolk County Coach of the Year three times.

His three sons were all coached by him in high school, and two of them played with the Montreal Expos organization.