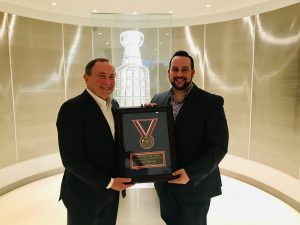 Gary Bettman, the Commissioner of the National Hockey League, was inducted to the Suffolk Sports Hall of Fame in 2019. He is a Dix Hills native and Half Hollow Hills alumnus.

Previously, Bettman was a senior vice president and general counsel to the NBA. Bettman was elected into the Hockey Hall Of Fame in 2018.

Under Bettman, the NHL has seen rapid growth of league revenues, from $400 million when he was hired to over $3.0 billion in 2010–11. He also oversaw the expansion of the NHL’s footprint across the United States, with seven new teams added during his tenure, bringing the NHL to 31, starting as of the 2017–2018 season. In May 2014, Bettman was named “sports executive of the year” by the SportsBusiness Journal and SportsBusiness Daily. In 2016, Bettman was inducted as a member of the International Jewish Sports Hall of Fame.