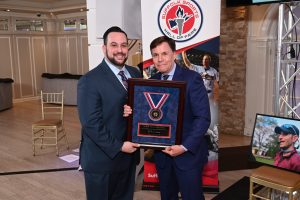 Bob Costas is one of the most well known sports broadcasters in American history. He grew up in Commack, N.Y. and was inducted to the Suffolk Sports Hall of Fame in 2019.

In 1973, Costas began his professional career at WSYR TV and radio in Syracuse, while still completing his communications degree at the S.I. Newhouse School of Public Communications. His sportscasting career began while attending Syracuse University, serving as an announcer for the Syracuse Blazers minor-league hockey team playing in the Eastern Hockey League and North American Hockey League.

After graduating in 1974 at the age of 22, Costas went to KMOX radio in St. Louis, Missouri, calling play-by-play for the Spirits of St. Louis of the American Basketball Association in 1974. He was a prominent contributor to the ABA book Loose Balls: The Short, Wild Life of the American Basketball Association. He is extensively quoted on many topics. The book includes his reflections of ABA life during his tenure as radio voice of the Spirits of St. Louis.

Later, Costas would call Missouri Tigers basketball and co-host KMOX’s Open Line call-in program. He did play-by-play for Chicago Bulls broadcasts on WGN-TV during the 1979–1980 NBA season. He was also employed by CBS Sports as a regional CBS NFL and CBS NBA announcer from 1976 to 1979, after which he moved to NBC. 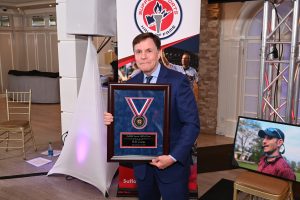 Costas has frontlined many Olympics broadcasts for NBC. They include the 1988 Winter Olympics in Calgary and 1988 Summer Olympics in Seoul, Barcelona in 1992, Atlanta in 1996, Sydney in 2000, Salt Lake City in 2002, Athens in 2004, Torino in 2006, Beijing in 2008, Vancouver in 2010, London in 2012, Sochi in 2014 and Rio in 2016. He discusses his work on the Olympic telecasts extensively in a book by Andrew Billings entitled Olympic Media: Inside the Biggest Show on Television. A personal influence on Costas has been legendary ABC Sports broadcaster Jim McKay, who hosted many Olympics for ABC from the 1960s to the 1980s.

Costas has won eight National Sportcaster of the Year awards from the National Sportscasters and Sportswriters Association. He was inducted into that organization’s Hall of Fame in 2012. He has also won four Sportscaster of the Year awards from the American Sportscasters Association and well over twenty Sports Emmy Awards for outstanding sports announcing. He is the only person in television history to have won Emmys for Sports, News (Sandusky interview), and Entertainment (Later).

In 1995, Costas received a star on the St. Louis Walk of Fame. In 1999, he was a recipient of the Curt Gowdy Media Award from the Basketball Hall of Fame, which is awarded to members of the electronic and print media for outstanding contributions to the sport. In 2000, he won a TV Guide Award for Favorite Sportscaster. In 2001, Syracuse University honored Costas with the George Arents Award, SU’s highest alumni honor, for Excellence in Sports Broadcasting. He was selected as the Dick Schaap Award for Outstanding Journalism recipient in 2004. In 2006, he was also awarded an honorary doctorate in humane letters from Loyola College in Maryland. In 2012, Costas was awarded the Walter Cronkite Award for Excellence in Journalism. In 2013, the S.I. Newhouse School of Public Communications honored him with the first Marty Glickman Award for Leadership in Sports Media.

Costas is an honorary trustee of Webster University, a private college located in Webster Groves, Missouri. He is a frequent supporter of the school and has been in numerous radio commercials for them. He is also an honorary board member of the Multiple Myeloma Research Foundation.