Rob Burnett played football at Newfield High School and graduated in 1985. He attended Syracuse University and was drafted by the Cleveland Browns in 1990.

At Syracuse he was a four-year letterman, and was a semifinalist for the Lombardi Award in 1989, his senior year.

Rob Burnett was drafted in the fifth round with the 129th pick in the 1990 NFL Draft by the Cleveland Browns, with whom Burnett made his only Pro Bowl.

He played there until the Browns moved to Baltimore, when he became a member of the Ravens. Playing for the Baltimore Ravens into 2001, Burnett earned a Super Bowl Ring when the Ravens defeated the New York Giants in Super Bowl XXXV.

Due to salary cap issues, Burnett was not brought back by the Ravens after 2001. After playing two more seasons with the Miami Dolphins, Burnett retired. 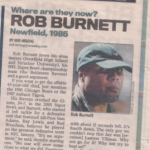 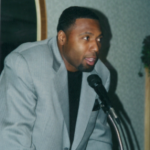 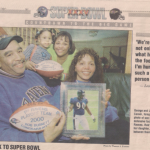