NEW YORK - CIRCA 1975: Outfielder Carl Yastrzemski #8 of the Boston Red Sox bats against the New York Yankees during an Major League Baseball game circa 1975 at Yankee Stadium in the Bronx borough of New York City. Yastrzemski Played for the Red Sox from 1961-83. (Photo by Focus on Sport/Getty Images) 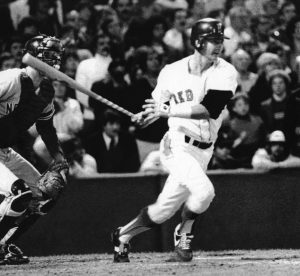 Carl Yastrzemski is an American former Major League Baseball player. He was elected to the Baseball Hall of Fame in 1989. He stared at Bridgehampton High School in eastern, Long Island.

Yastrzemski played his entire 23-year Major League career with the Boston Red Sox (1961–1983). He was primarily a left fielder, but also played 33 games as a third baseman, and mostly was a first baseman and designated hitter later in his career. Yastrzemski is an 18-time All-Star, the possessor of seven Gold Gloves, a member of the 3,000 hit club, and the first American League player in that club to also accumulate over 400 home runs. He is second on the all-time list for games played, and third for total at-bats. He is the Red Sox’ all-time leader in career RBIs, runs, hits, singles, doubles, total bases, and games played, and is third on the team’s list for home runs behind Ted Williams and David Ortiz.

In 1967 Yastrzemski achieved a peak in his career, leading the Red Sox to the American League pennant for the first time in over two decades and being voted the 1967 American League MVP. Yastrzemski also won the Triple Crown that year, a milestone which was not accomplished again in the Major Leagues until Miguel Cabrera achieved the feat 45 years later in 2012. 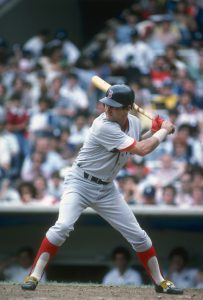 Yastrzemski was born in Bridgehampton, New York to Carl Yastrzemski, Sr. and Hattie Skonieczny. Both his parents were of a Polish background, and young Carl was bilingual from an early age. Raised on his father’s potato farm, Carl played on sandlot baseball teams with his father, who, he maintains, was a better athlete than he was. Carl also played Little League Baseball. “Yaz” attended Notre Dame on a basketball scholarship (his career Long Island high school scoring mark at Bridgehampton broke one previously held by Jim Brown) briefly before embarking on his baseball career.

Yastrzemski signed with the Red Sox organization, which sent him to the minor-league Raleigh Capitals in 1959, where he led the league with a .377 batting average. They then moved him to the Minneapolis Millers for the post-season and the 1960 season. Yastrzemski, who had studied business at Notre Dame, fulfilled a promise to his parents by finishing his degree at Merrimack College in North Andover, Massachusetts, in 1966.

Through the end of the 2017 season, on the all-time lists for Major League Baseball, Yastrzemski ranks first for games played for one team, second for games played, third for at-bats, sixth for bases on balls, eighth for doubles, ninth for hits, ninth for total bases, thirteenth for extra-base hits, and fourteenth for RBIs. 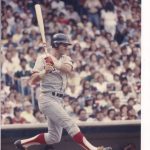 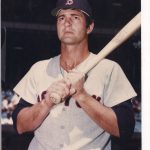