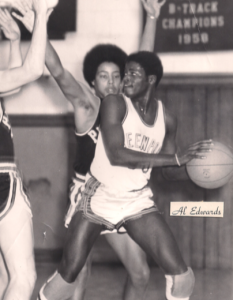 Edwards graduated from Greenport High School in 1972 as the leading scorer with 2,117 points over his four years on the basketball team. This placed him among the all-time scorers in the county, Long Island, and New York State (five players have outscored him since).

Edwards earned a basketball scholarship to East Carolina and was named team captain before graduating in 1976.

He returned to his old roots as a teacher at Greenport High in the fall of 1978 and also helped his old coach, Dude Manwaring, with the junior varsity team for three years.

Edwards was named the varsity team’s coach in the 1981-82 season. He compiled a 383-240 record with 12 league titles, 10 Suffolk Class D titles and three Southeast Regional titles which led Greenport to its only trips to the state tournament.

Edwards retired from coaching in 2013 and was honored with Greenport’s official court dedication in his name in 2017. He is one of only two Greenport athletes to have their retired jerseys hanging on the wall of the school’s gymnasium.