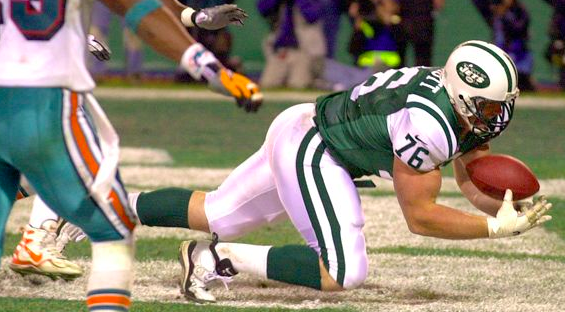 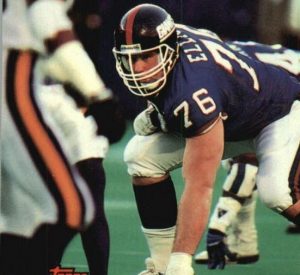 Played at Sachem and attended the University of Michigan. Elliott played 14 years as an offensive tackle in the National Football League with the New York Giants from 1988 to 1995 and the New York Jets from 1996 to 2000 and 2002. He appeared in 197 NFL games, including 156 as a starter. He was a key player on the 1990 New York Giants team that won Super Bowl XXV, received All-Madden honors in 1990 and 1991, and was selected to play in the 1993 Pro Bowl. His signature moment came in October 2000 when he caught the game-tying touchdown pass in the game known as the “Monday Night Miracle”.

Elliott played college football as an offensive tackle for the University of Michigan from 1984 to 1987. He started 45 games for Michigan and was twice selected as a first-team All-American, receiving those honors in 1986 and 1987. He was a consensus All-American in 1987.

Elliott was born in Lake Ronkonkoma, New York, in 1965. He attended Sachem High School on Long Island. He played football at Sachem High School, was selected to the New York Daily News all-star team, had his number retired by the school in 1989, and was inducted into the Sachem Athletic Hall of Fame in 2003. 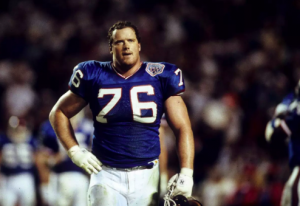 He became known for his dominant blocking, recording 11.5 pancake blocks in two games early in the 1986 season. He was selected a first-team offensive tackle on both the 1986 and 1987 College Football All-America Teams. In 1987, he was a consensus All-American, receiving first-team honors from the United Press International, Walter Camp Football Foundation, American Football Coaches Association, and Football Writers Association of America.

Elliott was selected by the New York Giants in the second round (36th overall pick) of the 1988 NFL Draft. He spent eight seasons with the Giants from 1988 to 1995. He appeared in 112 game for the Giants, 98 of them as the team’s starting left tackle. Elliott missed eight games to injury in the middle of the 1990 season, with the team averaging 149.9 rushing yards with him and 111.8 rushing yards without him. With Elliott back in the lineup, the 1990 Giants went on to defeat the Buffalo Bills in Super Bowl XXV. Elliott’s work against Buffalo defensive end Bruce Smith, enabling the Giants to rush for 172 yards, has been described as “one of the unnoticed keys to the Giants’ 1991 Super Bowl victory.” He received All-Madden honors in 1990 and 1991. He was also selected to play in the 1993 Pro Bowl, but did not play due to a back injury. 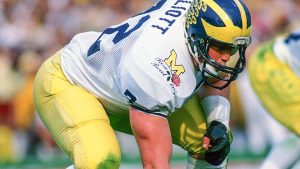 Elliott’s “signature moment” occurred in a Monday Night Football game on October 23, 2000. Late in the fourth quarter, the Jets were down by seven points to the Miami Dolphins when Elliott caught his only career pass, thrown by Vinny Testaverde, for a touchdown to tie the game 37–37. This play marked the end of the Jets’ comeback from being down by 23 points in the fourth quarter. The Jets won 40–37 in overtime. The game has become known as the “Monday Night Miracle”.

Elliott was released by the Jets in July 2001, and did not play during the 2001 NFL season. He made a comeback the following year and appeared in 16 games, none as a starter, during the 2002 New York Jets season.

In 14 NFL seasons, Elliott appeared in 197 games, including 156 as a starter at left tackle.

He was inducted to the College Football Hall of Fame in 2021. 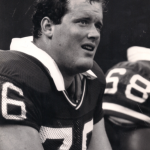 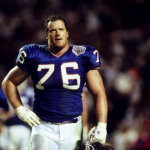 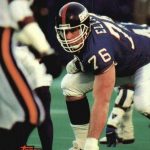 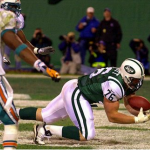 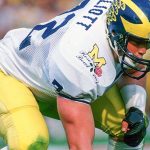