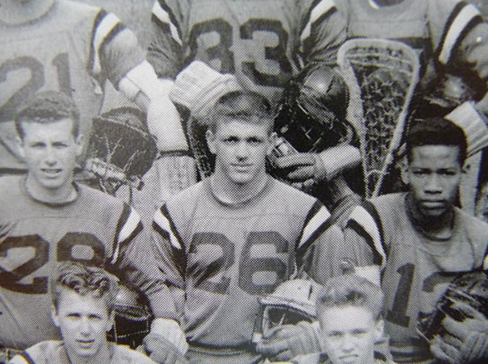 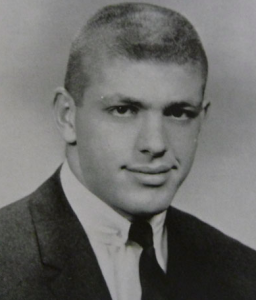 Ray Enners went to Half Hollow Hills High School, before there was ever a split in the district. Nicknamed “The Machine” by teammates, he was known for pushing people with his old-school personality on the lacrosse field. In time, the name Ray Enners and lacrosse became synonymous, but before he was off fighting for America in the U.S. Army, he was just Ray – a kind young, hard-working man, who loved lacrosse.

The captain of the football, basketball and lacrosse teams at Hills, Enners was a natural leader, who garnered press for his exceptional scoring touch. He was an All-County, All-Long Island and Honorable Mention All-America selection his senior year. Enners was a five-year varsity player and played in the first five Suffolk County championship games.

“He was probably the best lacrosse player I’ve ever coached,” says Bill Martens, Enners’ coach at Hills. “He was sensational. He had everything you could ask for in an attackman.”

Aside from drawing fans and his peers to love lacrosse, he was a major influence on his younger brother Rich.

“When you’re in high school and there is a following for your brother, the expectation is high,” he says.

That following has not died thanks to Enners’ valiant efforts on the battlefield.

While moving across a small valley, his platoon was ambushed by a reinforced North Vietnamese Army squad firing machine guns, automatic weapons and small arms from camouflaged positions on a hillside. A squad leader was severely wounded and fell within twenty meters of the communists. Helplessly trapped by raking fire from the enemy gunners, the badly bleeding squad leader called for help, but the deadly hostile fire kept anyone from reaching him. Lieutenant Enners, hearing his cries began moving forward to rescue him.

Rich Enners remembers one game from the ‘60s when Ray was cradling a ball near the cage and could have easily scored, but waited for his teammate to come closer so he could pass. Why? Because the teammate was one goal away from scoring the 50th goal of his career.

“It tells you that he was not all about the glory,” Rich says. “He’d be willing to give that glory to somebody else and that tells what kind of individual he was.” 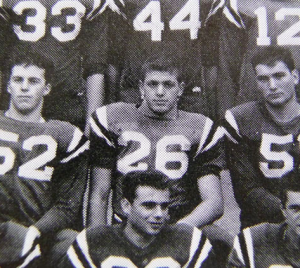 Martens recalls Enners always wanting to attend West Point, with the goal of representing Army on the lacrosse field. Rich said dozens of people used to come and watch him play in high school and college and everyone, “appreciated how hard he worked.”

The Enners had an athletic family, Rich said, stemming from their father Raymond, who played semi-pro football for a team in Farmingdale, Long Island.

In a day and age when statistics and records weren’t kept much at the high school level on Long Island, most prominent names have escaped modern day historical lingo, but few don’t know the name Ray Enners in lacrosse circles, and few Army aficionados are unaware of his heroism.

From his position one hundred meters back, he crawled forward through the rice paddies and leaped across the intervening dikes, dodging through continuous bursts of enemy fire until he reached his forward squad trapped behind a dike twenty meters from the fallen squad leader. With the aid of one of the other squad leaders, he dispersed his men and signaled for covering fire. He and the squad leader then jumped over the dike and ran forward through the blistering fire to within ten meters of the wounded man, but were forced to turn back when the North Vietnamese began throwing grenades.

Calling for a second burst of cover fire, the two men again raced across the bullet-ridden paddies, only to be halted again by the shrapnel of exploding grenades. Returning to the scant cover of the dike, Lieutenant Enners reorganized his men, maneuvering one squad twenty meters to the right of the enemy emplacements and directing the remainder of the platoon to areas from which they could lay down the most effective cross fire.

Signaling a third time for his men to open up on the aggressors, he and the squad leader vaulted the dike and again attempted to reach the wounded man. Braving the rounds scorching the air around them, they raced to the injured man’s position and took cover behind the dike. After applying first aid to the man’s wounds while the squad leader fired at the North Vietnamese, Lieutenant Enners picked up the injured man and again disregarded the risk of his own life to carry him back across the battlefield to the care of medical aidmen.

Moving to the squad on the right flank, he then led an attack on the communists. Charging through a hail of fire, he moved to within fifteen meters of the enemy before he was fatally wounded by hostile machine gun fire. First Lieutenant Enners’ extraordinary heroism and devotion to duty, at the cost of his life, were in keeping with the highest traditions of the military service and reflect great credit upon himself, his unit, and the United States Army.

On September 18, 1968, Lt. Enners was killed in action fighting with Company A, 1st Battalion, 20th and 11th Infantry Brigade. “He would have been 23,” says Rich, who was in his second year at West Point, following his brother. “It was not surprising. That’s the kind of person that he was.”

The man Lt. Enners risked his life to save, whose name is unknown, hails from Huntington, Long Island, according to Rich and Martens. Ironically, Huntington is Hills’ rival in all sports.

The Enners name lives on in multiple ways today. His name is on the Vietnam Memorial in Washington, D.C. one of the athletic hallways at West Point is named in his honor, and the Lt. Raymond Enners Award is presented by the USILA to the NCAA National Player of the Year in men’s lacrosse and to the top boys high school player in Suffolk County each year. The Army MVP each season is also given the Lt. Enners-Chris Pettit Award.

Pettit, who passed away in a snowmobile accident about eight years ago, is a graduate of Huntington High School and West Point. He and former Army lacrosse coach James F. Adams – a National Lacrosse Hall of Fame inductee – helped get the collegiate award created for the 1969 season. The high school honor began in 1970. Every May players at Half Hollow Hills East and West play at the annual Ray Enners Day festivities.

Ray Enners is an American hero and his name will live forever.