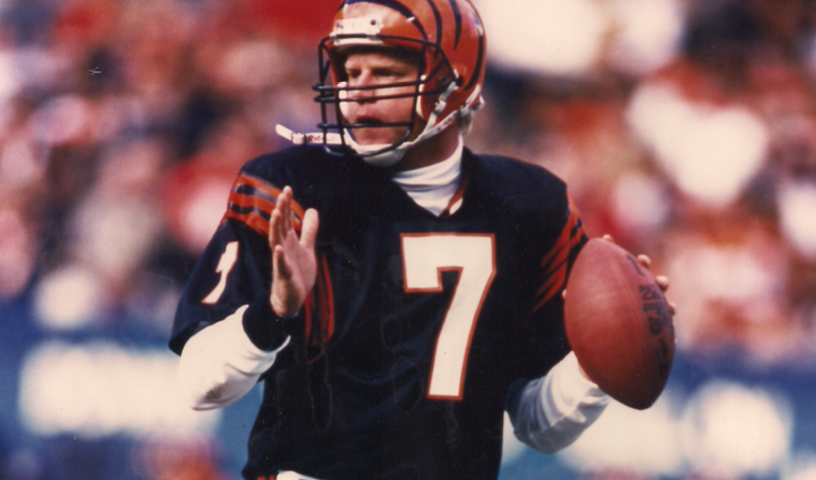 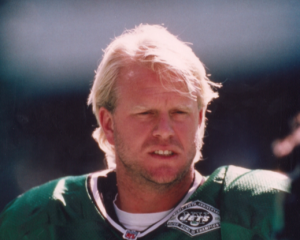 Played at East Islip H.S. Attended the University of Maryland. He was an NFL veteran quarterback for 13 years, where he played for the Cincinnati Bengals, N.Y. Jets and the Arizona Cardinals from 1984 to 1997 when he retired.

Esiason was born and raised in East Islip, New York. Esiason got the “Boomer” nickname before he was born. His mother, reacting to his constant kicking in the womb, called him “Boomer,” and he has kept the name since. His mother Irene, a singer, dancer and piano player, from whom he inherited his blond hair and blue eyes, died at the age of 37 of ovarian cancer when he was seven years old. His father Norman, a veteran of WWII, never remarried and in spite of a three hour daily commute to New York City, raised Esiason and his two sisters. He attended Timber Point Elementary and East Islip High School, where he graduated in 1979. In high school, he was a three-sport varsity player in football, basketball, and baseball.

Esiason played college football at the University of Maryland for head coaches Jerry Claiborne and Bobby Ross and offensive coordinator Ralph Friedgen. Maryland was the only college to offer him a scholarship. At Maryland, he set 17 school records. Esiason completed 461 of 850 passes (54.2 percent) for 6,169 yards and 42 touchdowns with 27 interceptions. He was a two-time honorable mention All-American in 1982 and 1983. In his final home game, he threw two third-quarter touchdown passes to lead a comeback victory over No. 3 North Carolina and seal the ACC title. Esiason graduated with a B.A. in 1984 and received the Distinguished Alumnus Award in 1999.

Following his final year at Maryland, Esiason was selected by the Cincinnati Bengals in the second round of the 1984 NFL Draft with the 38th overall pick, surprisingly low considering his successful college career. ESPN draft analyst Mel Kiper Jr. was, in Esiason’s words, “going ballistic” that he was still available in the latter stages of the first round. No quarterbacks were drafted in the first round; Esiason was actually the first quarterback selected, as Steve Young had signed with the L.A. Express of the USFL. His USFL territorial rights were controlled by the Washington Federals franchise of the now-defunct United States Football League.

Boomer got his first pro start on October 7, 1984, in Cincinnati in a game against the Houston Oilers. On a rainy day, Boomer led the Bengals to a 13–3 win over Houston and scored the game’s only touchdown on a three-yard run. He took over for Ken Anderson as the Bengals’ full-time starting quarterback on September 22, 1985, in a loss in Cincinnati to the San Diego Chargers and future Hall of Famer Dan Fouts 44–41. At 6′-5″ and 224 pounds with a powerful arm, Esiason was the signal caller on one of the most potent offenses of the late 1980s and, though well short of Ken Anderson’s rushing total of over 2,200 yards, was surprisingly mobile, rushing for 1,598 yards on 447 attempts and scoring seven touchdowns in his career. He was particularly adept at running the difficult “no huddle” offense devised by Bengal Head Coach Sam Wyche.

On December 21, 1986, the final game of the 1986 season, he set a team record by throwing five touchdown passes as Cincinnati shot down the New York Jets 52–21. He also set the team single season passing record of 3,959 yards in this game. It was the last game of Bengals’ quarterback Ken Anderson’s playing career.

After leading Cincinnati to six straight wins to begin the 1988 season, on October 16, 1988 he set a single game team record throwing 5 interceptions in a 27–21 loss to the New England Patriots. The team finished the season 12–4 with the highest scoring offence in the NFL, securing the organization’s fifth AFC Central division title. He finished the season as the NFL’s top rated passer. Cincinnati defeated Seattle and then Buffalo in the playoffs to reach Super Bowl XXIII, their second appearance in a Super Bowl, a rematch with the San Francisco 49ers. In the game, Bengals cornerback Lewis Billups dropped a sure interception in the end zone which would have sealed a Cincinnati win. The San Francisco 49ers, led by future Hall of Fame quarterback Joe Montana, marched 92 yards on their last drive and scored on a touchdown pass to receiver John Taylor with 34 seconds remaining in the game. A last-ditch pass by Esiason to wide receiver Cris Collinsworth was broken up, resulting in a 20–16 loss for the Bengals, their second close loss to the 49ers in a Super Bowl.

On October 29, 1989, he tied his own record for touchdown passes in a game as the Bengals demolished the Tampa Bay Buccaneers 56–23.[9] The Bengals tied a team record with eight touchdowns in the game.

Esiason, who had worked with Jets head coach Bruce Coslet in Cincinnati, was traded to the Jets for a third round pick in 1993 (which became linebacker Steve Tovar), subsequently guiding their offense until the end of 1995 under three different head coaches: Coslet, Pete Carroll, and Rich Kotite. During his 1995 season with the Jets, he was seriously injured in a game played on October 8 against the Buffalo Bills when rookie Everett McIver was whistled for a false start and Bruce Smith of the Bills raced around him and caught Esiason under his face mask. Smith was terribly upset about Esiason’s injury and said he never heard a whistle blowing the play dead for false start. That horrific collision gave Esiason a severe concussion, which kept him out until November 19. He is thought to have been the first NFL player to enter a concussion study during the season.[citation needed] When he returned to the field it was coincidentally in a game that was played against the Bills.

After being released by the Jets, Esiason signed with the Arizona Cardinals as a free agent in 1996. It was during this season, on November 10, 1996, that Esiason threw for the fourth best passing yardage day in NFL history, with 522 yards in a 37–34 overtime victory over the Washington Redskins. Two weeks later he led a fourth-quarter comeback against the playoff-bound Eagles.

Second stint with the Cincinnati Bengals (1997)

Esiason contemplated retirement in the off-season, but was talked into playing one more season with the Bengals. Esiason was surprisingly effective after replacing Jeff Blake midway through the 1997 season, throwing for 13 touchdowns with only two interceptions and garnering a passer rating of over 106 for the season. The Bengals were 3–8 with Blake under center. With Esiason at quarterback, they won four of their last five games and scored over 30 points four times – twice they broke 40 points, in a 44–42 loss to the Philadelphia Eagles and a 41–14 rout of the Tennessee Oilers. The Bengals wanted Esiason to come back for two more years.

On December 21, 1997, he played his last NFL game. His last play was a 79-yard touchdown play-action pass to wide receiver Darnay Scott. The touchdown proved the winner in a 16–14 victory over the Baltimore Ravens. He finished the season with a 107 quarterback rating.

While at a Jets mini-camp in 1993, Esiason was notified that his two-year-old son, Gunnar, had to be taken to the hospital with breathing difficulties. Soon after, Gunnar was diagnosed with cystic fibrosis, a disease of the respiratory and digestive systems. The Boomer Esiason Foundation (BEF) was formed soon afterward to fund research to find a cure for the disease. The Foundation also provides scholarships, transplant grants, hospital grants, education and awareness of cystic fibrosis as to provide higher quality of life for people with CF. The foundation has raised in excess of $100 million as of March 2, 2013, and has supported numerous hospitals, including Cincinnati Children’s Hospital with the Gunnar H Esiason CF/Lung Center and Columbia Presbyterian in NYC with the Gunnar H Esiason Adult CF and Lung Program. The foundation has given over $2 million in scholarship grants to CF patients. The foundation is located in New York City and runs numerous events around the country.[39] The Boomer Esiason Foundation annually receives four stars from Charity Navigator.

In 1996, Esiason formed a partnership with Cantor Fitzgerald and Howard Lutnick (CEO) as the foundation offices were moved to the North Tower of the World Trade Center in lower Manhattan on the 101st floor. This was destroyed in 2001 in the September 11 attacks. All five full-time employees survived, as none were in the building at the time, but “Esiason figured he knew over 200 people personally” who were killed in the attack, including his best friend Tim O’Brien who was a partner at Cantor.

As of 2017 Gunnar Esiason is now an extremely active 26-year-old graduate of Boston College who undergoes daily treatments and takes cystic fibrosis medications.[41] He was a quarterback for his high school football team at Friends Academy in Locust Valley, NY, and played forward on his ice hockey team for the Manhasset/Roslyn varsity hockey team. Gunnar also writes a popular blog and appears daily in a podcast discussing the issues confronting Cystic Fibrosis patients. Gunnar and his father are teammates on their local hockey team. 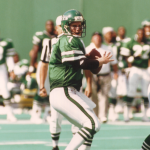 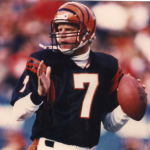 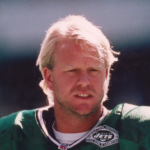 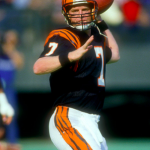 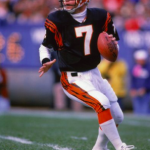 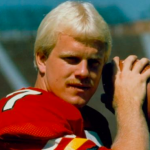 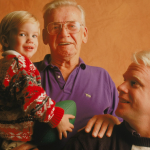