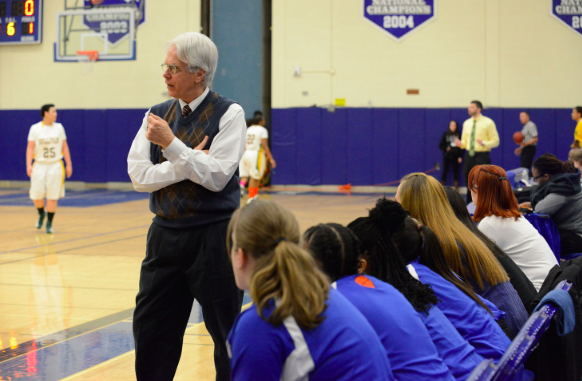 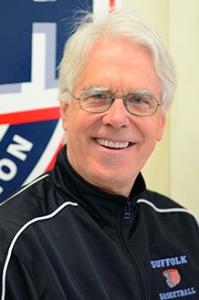 A long time Long Island resident, Kevin Foley graduated from Seton Hall High School in 1965, where he averaged 30 points per game as a senior and was coached by the legendary Frank Layden (President/Head Coach Utah Jazz). Foley held the Suffolk and Long Island high school basketball career-scoring records for many years. He received a basketball scholarship to Seton Hall University and was captain in 1968-1969, averaging over 14 points per game. In 1994, Kevin Foley was inducted into the Suffolk Sports Hall of Fame in honor of his outstanding basketball playing career.

He has maintained a close link with the game since that time. A major milestone Coach Foley has attained is earning his 400th career win in 2015, as Suffolk County Community College’s Women’s Basketball Head Coach. Coach Foley’s career coaching record stands at 433-125, and he is the winningest coach in Suffolk County Community College history. His 24-year tenure is also the longest achieved at one college by a coach in the New York metropolitan area. During his years at the helm, he has recorded nine 20-plus winning seasons.

Foley’s career includes teams that played in 14 semi-finals, winning six regional championships, and a national title. Additionally, his teams have won 12 regional sportsmanship awards and one national sportsmanship award. He was recognized by the NJCAA as National Tournament Coach of the Year in 2003 and by the Basketball Coaches Association of New York as New York State Coach of the Year in 2002 and 2003. Over 45 of his former players have continued their intercollegiate athletic playing careers at four-year Division II and Division III schools.

College President Dr. Shaun L. McKay has announced the basketball court in the Brookhaven Gymnasium on the College’s Ammerman Campus in Selden will be named in honor of Athletic Director Foley for his many years of academic and athletic service and commitment to Suffolk and the community at large.

In addition to his 24 years of coaching, Foley currently serves as the College’s Director of Athletics for the second time in his career. He is also a full professor of Health and Human Services at Suffolk. Some of the noteworthy academic awards he has received include: State University of New York (SUNY) Chancellor’s Award for Excellence in Teaching (2004); Distinguished Faculty Award, SCCC (2003); Outstanding Community College Teacher, University of Texas (1983); and Teacher Who Made a Difference, SCCC (1981).

In 2015, highlighting the accomplishments that occurred within the area of athletics, the College was recognized among the top three in the National Alliance of Two-Year College Athletic Administrators (NATYCAA) Directors’ Cup competition. This award is presented annually by the National Association of Collegiate Athletic Directors of America (NACDA) and NATYCAA to the top intercollegiate two-year athletic programs in the country and honors institutions that excel in both men’s and women’s athletics. Each participating institution is awarded points in a pre-determined number of sports for men and women. The overall champion is the institution that records the highest number of points in their division’s standings. Suffolk was ranked 3rd out of over 200 two-year colleges at the D-III non-scholarship level. Suffolk also placed 8th nationally among the 538 Division I, II, and III colleges at the two-year level, in the Leaderfield National Sports Director’s Cup. This is a huge honor for the College’s student-athletes and coaching staff and was accomplished under the leadership of Athletic Director Foley.

For the 12th time in 20 years, the College’s Women’s Basketball team received the Joe DeBonis Sportsmanship Award from the Collegiate Basketball Officials – Metro New York. This Region XV award was presented in recognition of outstanding sportsmanship during the regular season.

The prestigious Mickey Crowley President’s Cup was also awarded to the College’s athletics program for best exemplifying sportsmanship throughout its teams. This award is presented by the Greater NY Metropolitan Officials Association and is voted upon by the officials in each sport. This is the third time that Suffolk County Community College has been selected for this honor.

Under Athletic Director Foley’s leadership, numerous athletes who have competed on the College’s athletic teams have been selected as All-Americans, Academic All-Americans, and have also been honored for their sportsmanship, both regionally and nationally.