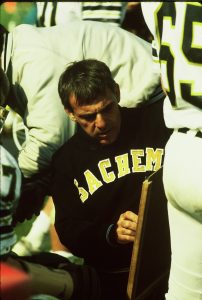 Fred Fusaro was the head football coach at Sachem High School for 32 years. He won 192 games and six Suffolk County championships during his tenure.

Sachem made the playoffs for 22 straight years and he was named Suffolk County Coach of the Year 14 times.

In 1999 the field was named in his honor at Sachem. He was later inducted to the Sachem Athletic Hall of Fame in 2016.