Minnesota Timberwolves forward Tom Gugliotta brings the ball up the floor during first quarter action against the Charlotte Hornets at the Charlotte Coliseum in Charlotte, N.C., Tuesday, Feb. 4, 1997. (AP Photo/Peter A. Harris)

In 1992, he was an NBA first-round (6th overall) draft pick of the Washington Bullets. He made the NBA All-Rookie First Team by the end his first season.

He was also a part of the 1999 gold-medal FIBA Americas Championship national team in San Juan.

His father, a longtime basketball coach at Whitman, is also an inductee of the Suffolk Sports Hall of Fame. 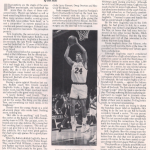 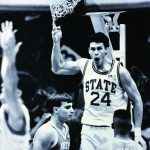