Bob Hoppey was the Brentwood lacrosse coach from 1959 to 1988. He had 303 wins and won nine league championships and three Suffolk County championships.

After an outstanding athletic career at both Port Jervis High and Cortland, Hoppey demonstrated his equally successful talent as an educator and coach during the past three decades in the Brentwood Public School System. Hoppey, the two time Red Letter Award winner on Cortland’s 1953 and 1954 football squads, not only introduced the sport of lacrosse at Brentwood in 1958 but in the ensuing 27 seasons led his teams to more than 280 victories, eight league titles and a trio of Suffolk County championships.

His lacrosse achievements have earned Hoppey “Coach of the Year” honors in the conference, Suffolk County and Long Island. Hofstra University presented him with its “Crosse,” for outstanding contributions to the game of lacrosse in Suffolk County. Hoppey has coached the Long Island Empire State Games squad and on three occasions and has directed the South squad in the annual Suffolk County North-South Lacrosse Game.

He has received the prestigious New York State Coaches Association Honor Award. A physical education instructor popular with his students, Hoppey was voted Brentwood Sonderling “Teacher of the Year” in 1982, having already had the 1971 Brentwood Arrowhead Yearbook dedicated to him.

Hoppey grew up on Port Jervis, N.Y., where he lettered in baseball, football, basketball and track at Port Jervis High. He captained the Red Raiders football unit, hit over .300 in baseball, and was the Orange County 220-yard sprint champ. Roger Robinson, who coached Hoppey at Port Jervis and would later direct the SUNY Cortland football units in the 1960’s and 70’s steered Hoppey to college and, more specifially, to Cortland.

At Cortland, Hoppey excelled on the gridiron, starting at both quarterback and defensive back. He also lettered as a lacrosse defenseman. Hoppey was president of the Beta Phi Epsilon fraternity, winning its Achievement Cup for outstanding service in his senior year. He also served on the Men’s Athletic Association Council before earning a B.A. in recreation education in 1955.

Hoppey taught elementary physical education and coached tennis at Shenendehowa Central School for a year before arriving at Brentwood in 1957. An active community member, Hoppey has served on the Board of Directors of the P.T.A. North Country School, coached Midget Football in Setauket and officiated in the Stony Brook Youth Basketball League. He is a charter member of the Brentwood Booster Club, the Three Village Booster Club, the Long Island Lacrosse Foundation and the SUNY Cortland C-Club. Hoppey is a past president of the Brentwood Coaches Association and the Suffolk County Lacrosse Coaches Association. He is the director of the Brentwood Summer Swimming Program and is the varsity swimming club advisor. 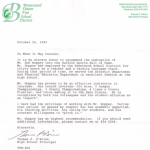 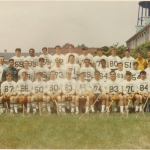