James is a retired professional basketball player who played at Amityville High School. He had the most three-pointers in a single game as a senior and is the fourth best all-time leading scorer in the school’s history. 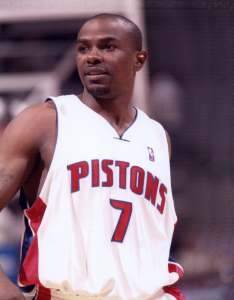 He played for Duquesne University in Pittsburgh, where he finished his career ranked 3rd at the school in steals (201), 5th in assists (348) and 10th in points (1,411). He led the team in both steals and assists his final 3 seasons.

He played in Austria and France before being signed by the Miami Heat as a free agent during the 2001-02 season. He has since played for the Celtics, Pistons, Bucks, Rockets, Raptors, Timberwolves, Hornets, Wizards, Bulls, and the Mavericks, averaging 10.0 points per game for his career.

Mike is constantly speaking to high school and college players about the importance of a good education and being a positive role model in their communities. He is currently involved in a major community project in North Amityville to rebuild the Bolden Mack Park, where he began his own basketball career.