By the time Jeff Ruland was done showing videos of him shutting down Michael Jordan and explaining his journey to the NBA, he was signing autographs and taking photos with students.

Ruland, a two-time NBA all-star who played with the Bullets and Sixers, was the latest guest speaker through the partnership between the Suffolk Sports Hall of Fame and Port Jefferson Schools.

A Sachem alumnus, Ruland was a star at Iona before being drafted by Golden State in 1980. His rights were traded to Washington and he opted to play in Europe for one season before making his NBA debut. He was inducted to the Suffolk Sports Hall of Fame in 2013.

Students in the sports history class asked an arrangement of questions about his life and career, but they were most captivated when Ruland referred to YouTube clips of him dunking on fellow NBA big men, and sharing stories about playing against Michael Jordan in the legend’s first NBA game. 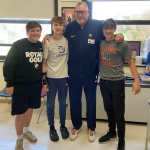 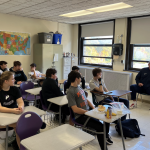 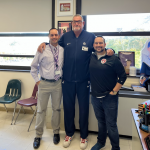 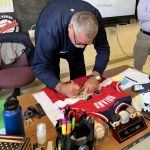 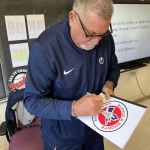