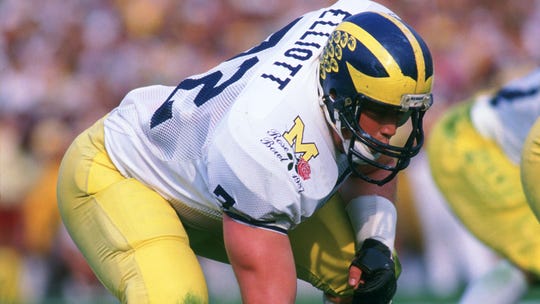 Add another hall of fame to Jumbo Elliott’s resume.

One of the top linemen in Long Island history and an inductee of the Suffolk Sports Hall of Fame is also one of the best in college football history. Sachem alum John “Jumbo” Elliott learned he will be inducted to the College Football Hall of Fame.

The former NFL veteran will be inducted at a ceremony in New York City on December 8. Other inductees for the Class of 2020 include Eric Dickerson, Steve McNair, and others.

A two-time First Team All-American, Elliott garnered consensus honors during his senior campaign.
A finalist for both the Outland Trophy and the Rotary Lombardi Award in 1987, he finished his career with a then-school record 44 career starts on the offensive line, a mark that currently ranks sixth.
A two-time First Team All-Big Ten selection, Elliott guided Michigan to a share of the 1986 conference title and two top 10 finishes (No. 2 in 1985 and No. 8 in 1986).
A member of the 1987 All-Bowl Team, he led the Wolverines to four postseason games, including wins in the 1986 Fiesta Bowl and 1988 Hall of Fame Bowl.
The anchor of College Football Hall of Fame coach Bo Schembechler’s potent offense, Elliott was key to the team’s 5,396 yards of total offense and 286 first downs in 1986, which were both single-season Michigan records at the time.
The 1987 recipient of Michigan’s Hugh H. Rader Jr. Memorial Award as the team’s best lineman, Elliott helped the Wolverines rush for more than 2,500 yards in each of his last three seasons in Ann Arbor.
A 2015 inductee into the University of Michigan Hall of Honor, he capped his collegiate career by playing in the Hula Bowl, Japan Bowl and East-West Shrine Game.
Taken in the second round of the 1988 NFL Draft by the New York Giants, Elliott played 14 seasons in the NFL with the Giants (1988-95) and New York Jets (1996-2000, 2002).
A member of the Giants 75th Anniversary All-Time Team, he guided the team to a Super Bowl XXV victory following the 1990 season, and he was elected to the Pro Bowl in 1993.