In 1967, Landers began his long association with Suffolk County sports when he was hired by WGLI radio to do the play by play for the Long Island Ducks minor league hockey team.

For 17 years, he was the radio voice for the New York Islanders. At WCBS Radio in New York, he covered 6 Olympic Games as a sportscaster. 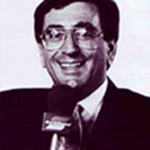 He was also the play-by-play voice for college and high school sports on Sports Channel & Cablevision of Long Island. He currently heads his own TV sports production company, Landers Sports Productions.

They produce a variety of sports from football to basketball to lacrosse, showcasing the best public and parochial school athletes on Long Island, as well as featuring the best football & basketball teams in the tri-state area for the YES Network.

Barry is a founding father of the National Jewish Sports Hall of Fame, where he was inducted in 2004.

Landers has been involved in mentoring broadcast students at Hofstra University, who have been providing color commentary and reporting in addition to studio engineering for Islanders broadcasts since the 2010-2011 season.