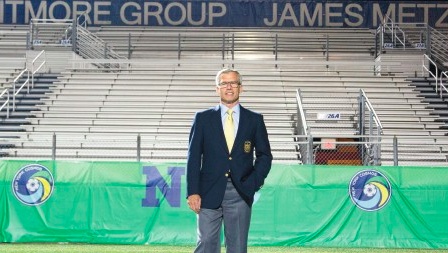 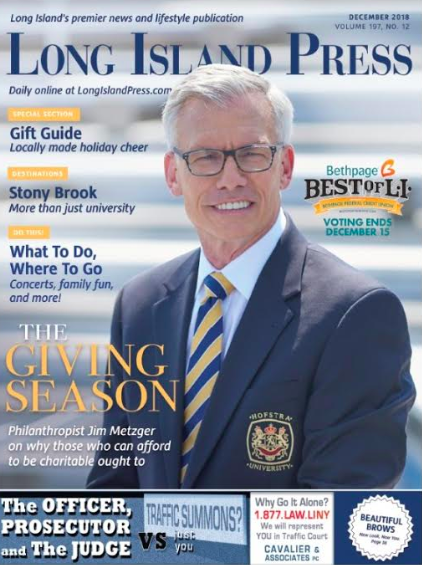 James C. Metzger is an American businessman and philanthropist. He is the chairman and CEO of The Whitmore Group, a leading Long Island insurance brokerage and financial services firm that he founded in 1989. Metzger is a former All-American Lacrosse player at Hofstra University.

Metzger grew up in Dix Hills, NY where his on the field success as an athlete in the early part of his life was a strong influence on his later approach to business. His personal blog is titled “Everything I ever needed to know about business I learned on the sports field”. Early sports also had a major impact on the focus of his philanthropic contributions.

At Half Hollow Hills High School in Dix Hills, Metzger was an All-American in Lacrosse. He won the Lt. Ray Enners Award as Outstanding Lacrosse Player in Suffolk County in 1977. Metzger’s scoring average of 6.0 points per game was a school record and led Suffolk County (Public Schools). In 1977 Metzger set school records for Points in a Season, Assists in a Game, Season and Career.

Metzger was also a stand out in football, graduating in 1977 with the distinction of being the school’s all-time leading scorer and rusher. He was a Suffolk County All-Star Running Back, known for starting 25 consecutive games, in which he rushed for 2,155 yards, scored 27 touchdowns and 170 points. Metzger’s career total offense including receptions and return yards was 2,777. He led the team in scoring in ’74, ’75 and ’76 and rushing in ’75 and ’76. In 1977 Metzger was also the only high school athlete to be selected and participate in both the Suffolk County North – South ALL-Star Football Game and the North – South ALL-Star Lacrosse Game. He started at running back on the North Football Team and started at Attack for the North Lacrosse Team. He was recruited to play football by Syracuse, Cornell and Colgate, and was recruited to play Lacrosse by Virginia, Army, Navy, Cornell, Penn State, Towson, North Carolina State and Hofstra. As a sophomore, Metzger played for the 1974-1975 Half Hollow Hills Varsity Basketball team in the Suffolk Country Playoffs.

After High School, Metzger attended the Naval Academy Preparatory School. He was a starter at running back on the football team, but suffered a severe shoulder injury which ended his football career. Metzger led the Lacrosse Team in goals, assists and points and won the team’s Most Valuable Player Award. 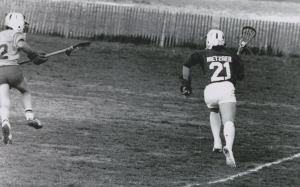 Metzger was a Division 1 All-American Lacrosse player at Hofstra University. His Sophomore record setting scoring average of 4.9 points per game still stands. His single season average still ranks 5th in the history of the Hofstra lacrosse program. Metzger’s single season assist average ranks 8th all time. Metzger is one of only 3 players in the history of Hofstra’s Men’s Lacrosse program to score 8 or more points three times in one season when he recorded 8 points against Penn State, Towson and North Carolina State in 1980.

The company has more than 70 employees and is located in Garden City, NY.

Metzger has been a frequent donor to several educational and charitable organizations over the years with Hofstra University, his Alma Mater, receiving the largest share. In 2012 Metzger made a donation of $1.5 million which was the largest gift ever received by Hofstra Athletics. Hofstra named The James C. Metzger Fund for Capital Improvements and The James C. Metzger Hofstra Lacrosse Endowment in his honor after that donation.

Metzger received the Hofstra Alumnus of the Year Award in 2016 and was inducted into the Hofstra Athletics Hall of Fame in 2015. In 2012 he received Hofstra University’s Alumni Achievement Award, an award given to alumni who have distinguished themselves in their chosen fields of endeavor and/or demonstrated outstanding service to the University. A year earlier he was given Hofstra’s Joseph M. Margiotta Distinguished Service Award.

Hofstra presents two annual awards named in honor of Metzger. The Metzger-D’Innocenzo Endowed Summer Internship for the Center for Civic Engagement was established in 2009 with funding provided by Metzger. The James C. Metzger Outstanding Sophomore Award for Lacrosse was established in 2012. Metzger had left Hofstra lacrosse after being an All-American during his sophomore season and so that particular award was deemed appropriate to honor him.

Metzger’s major philanthropic involvement with Hofstra University started in 2007 with several special projects involving improvements to the Margiotta Hall. Margiotta Hall is a three-story, 22,500 square-foot building that is the main field house used for Hofstra athletics. 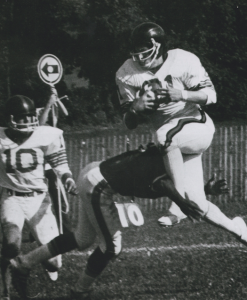 The Royle – Sombrotto Men’s Lacrosse Locker Rooms at Hofstra were built with funds donated by Metzger in 2007. According to Metzger, he wanted to memorialize the contributions to Hofstra lacrosse of two individuals who had also impacted his own life and career. His coach, Harry Royle, was Hofstra’s Head Men’s Lacrosse Coach from 1976 through 1985. Vincent Sombrotto was a former teammate and professional lacrosse player who, according to Metzger had a will to win and level of intensity that made him “the closest thing to a perfect lacrosse player that I have ever seen.”

The Hallway Traditions Project at Hofstra University’s Margiotta Hall showcases the history of the men’s and women’s lacrosse programs and the football program. The project was funded by Metzger in 2009 and was named after Hofstra standout athletes Mike D’Amato ‘68 and Lou DiBlasi ‘61. DiBlasi was also Metzger’s coach at Half Hollow Hills High School.

The Lacrosse Reception Room at Hofstra University was named after Gary Arnold ’83 and the Unterstein family. Arnold, who was Metzger’s teammate at Hofstra, was a four-year letterman in lacrosse and team leader in goals in 1981 and 1982, He went on to serve as an assistant coach under Harry Royle after graduation. The Unterstein family is the only family in Hofstra Lacrosse history to collectively earn conference player of the year (Chris, 2006), defensive player of the year (Kevin, 2008) and rookie of the year (Mike, 2005). Chris Unterstein earned first-team All-America honors in 2006, while Kevin was an honorable mention All-American in 2007. The three brothers also participated in the North-South Senior All-star game (Chris in 2006, and Kevin and Mike in 2008). Funding for renovating the space was provided by Metzger in 2009.

The Metzger-Huff Lacrosse Offices at Hofstra University were dedicated in 2010 and named after Metzger and Kevin Huff (Hofstra ’78). When Metzger learned that Hofstra wanted to name the Lacrosse Offices after him he insisted that they also be named for Huff who was an assistant coach when Metzger was at Hofstra. A football and men’s lacrosse standout, Huff was a two-time All-American in lacrosse, All-American in Football and still holds the Hofstra record for rushing yards per game. Funding for the construction was provided by Metzger. The James C. Metzger Women’s Lacrosse Locker Room was named in 2010.

Other Notable Charities and Recognition

Big Brothers Big Sisters of Long Island (BBBSLI) named the James C. Metzger and E. David Woycik Endowment Fund in 2010 after Metzger and Woycik made the single largest contribution in the history of BBBSLI. That same year Metzger was the honored as the Big Brothers Big Sisters Man of the Year and Presidential Honoree and helped raise $300,000 at the Gala presentation.

Metzger has made substantial contributions of time and money to the Funeral Service Foundation (FSA) in its mission to provide grants, scholarships and research to support the funeral service industry. In 2010, Metzger – a former board member of the FSF – delivered the second half of a $100,000 gift to the organization.

Metzger was honored by the American Heart Association named Metzger as the sole honoree of 2013 Golf Classic. Metzger and The Whitmore Group were the major sponsor and helped raise almost $300,000 – the most in the event’s history.

The National Jewish Sports Hall of Fame and Museum selected Metzger to receive its 2013 George Young Award which is given to an individual, Jewish or non-Jewish, who has best exemplified the high ideals that George Young displayed.

Metzger was inducted into the Suffolk County Sports Hall Of Fame in 2014.

In 2016 Metzger became the 25th recipient of the Woodruff Lifetime Achievement Award presented by the Adelphi University Athletic Hall of Fame. The honor recognizes “excellence in coaching, teaching and educating young adults while saluting an ambassador of sportsmanship and goodwill and stressing that the athletic experience enhances the educational experience an quality of life.”

James C. Metzger Stadium, a new 1,000-capacity stadium at St. Anthony’s High School, was completed in 2016. Metzger was not a St. Anthony’s alum, but has become a benefactor to that school. He said he grew up in the area and it was the epicenter of his world growing up, calling it “A great environment, great history, great legacy both academically and, of course, athletically at St. Anthony’s.”.