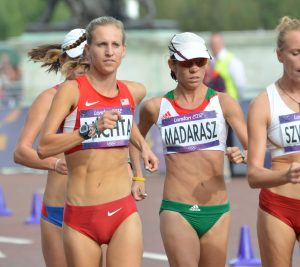 In her high school days at Sachem and her college days at C.W. Post, she was an indoor and outdoor race walking champion numerous times.

She has won more than 25 national titles, and now holds five open American records. She has been a member more than 20 U.S. National track and field teams.

In 2014, she broke the American record in the 20k and 15k race walk at the IAAF Race Walk World Cup.

Most impressively she is a two-time Olympian, competing at the London Games in 2012 and the Rio Games in 2016.

She is also a member of the Sachem Athletic Hall of Fame.