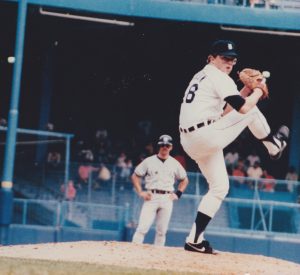 Gibson is a former MLB pitcher who played at Center Moriches High School. He graduated early in January of 1978 because he was signed to play with the Cincinnati Reds, in the third round of the supplemental draft. He went on to play for the Tigers, Mets and Yankees.

In 1995, he opened a baseball training facility in Bellport to provide proper baseball instruction to young kids in the community he grew up in.

Beginning in 2006 and for three years, Gibson served as an area scout supervisor for the Atlanta Braves.

He was in charge of all scouting aspects of amateur players in the Northeast. In 2008, the Seattle Mariners hired him as a talent-evaluating scout and worked closely with the team’s baseball operations department.