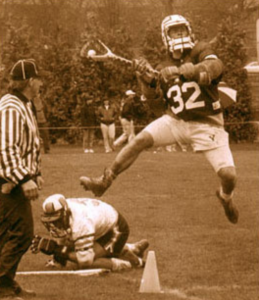 Reese is a former West Babylon High School lacrosse and football player, where he is still considered one of their top five athletes ever.

In football, he was the team leader in passing, touchdowns, unassisted tackles and interceptions for both 1984 and 85, and in rushing for 1985. He was also the team MVP in 1984 and 85.

Jon was a three-time All-League, two-time All-County and two-time All-State selection and elected to the Newsday All-Long Island Team in 1985.

In lacrosse, his four year stats were 197 goals with 76 assists. He was the team MVP twice and an All-League and All-County selection three times. He was also an All-American and the 1986 winner of the Ray Enners Award, given to the best county lacrosse player, as well as the Adelphi University Award, given to the Suffolk County lacrosse player with the highest academic average.

On the Empire State Team in 1986, he was the captain and high scorer and they went on to win the Gold Medal.

Jon attended Yale University where he continued to play both football and lacrosse.

In football, he was second in team tackles all three years that he played and was the captain and MVP of the 1989 Ivy Championship team.

In lacrosse, his four year stats were 162 goals and 200 career points, a Yale record. In 1990, he was named the NCAA Division I Midfielder of the Year and leading scorer in the country with 82 goals and 15 assists.

Jon currently coaches football and lacrosse in youth leagues in West Islip where he resides. His son Jon also played lacrosse at Yale.

The lacrosse stadium at Yale is named in his and his brother Jason’s honor.