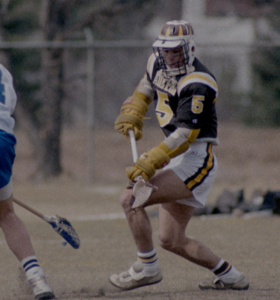 Outstanding four-year starter in lacrosse and soccer at Rocky Point in the 1980s.

In soccer, he led Suffolk County in goals in 1985 with 35, making him the fourth all-time scorer in a single season. He is also ranked fifth in all-time career goals with 72. He was the team captain in 1985 and led his team to the NYS championship.

In lacrosse, he led the county in scoring in 1985 and was an All-County selection as well as team captain. He was also a member of the 1985 Gold Medal Empire State Team.

Jeff went on to play lacrosse at Adelphi University from 1986 to 1990, where he was a two-time All-American. He led the nation in scoring with 60 goals in 1989, where he averaged four goals per game. He was Adelphi’s all-time leader in goals – 175 – which ranked him ninth in Division I schools, and he was their all-time leader in ground balls with 298.

He was the team captain in 1990 and the Adelphi Athlete of the Year in 1989. He is a member of their Athletic Hall of Fame at the school.

Jeff has been a teacher at Outreach House II in Brentwood for over 20 years, where teenagers are fighting to get their lives back after academic failure and behavioral problems in a regular classroom setting. He independently sought volunteer assistance to create a library at the school, where he works with students to improve their reading skills. He is highly regarded by his peers, athletes and students and has a true gift for working with teens at risk.

His brother Scott, the athletic director at Mount Sinai, is also an inductee of the Suffolk Sports Hall of Fame.