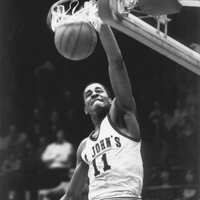 David Russell played at Bellport High School from 1975-1979. One of those years were spent on the junior varsity team and the three years remaining he played on the varsity team. Russell was given the title of captain during his one season on the JV team as well as his junior and senior seasons on the varsity team. Due to his efforts he was his team’s leading scorer and was named an All-League, All-County, and All Long Island player. Additionally, Russell led the team to three league championships and a Suffolk County Championship.

These efforts earned him scholarship offerings from many different colleges, but Russell decided to attend St. John’s University after graduating in 1979. There, he earned the title of Freshman of the Year in 1980 in the Big East Conference. During his senior year, he was an honorable mention as an All-American and made the All Big East Team. He was also inducted into the St. John’s University Athletic Hall of Fame.

After graduating in 1983, Russell played in professional basketball leagues in Europe. This included Spain for 13 years.

Currently, David Russell spends his time giving back to his community by providing Red Storm basketball tickets to adolescents and volunteers at the Men’s Club at the Boys and Girls Club of Bellport where he helps run their basketball clinics.

He is one of the leading scorers in St. John’s history and an inductee of their Hall of Fame. He also played in Spain for 13 years. He gives back to his community by providing tickets to St. John’s games to the youngsters in Bellport and he volunteers at the Men’s Club at the Boys & Girls Club of Bellport where he helps run their basketball clinics.