The Suffolk Sports Hall of Fame honored its third historic location with a special marker on Thursday, May 5, 2022.

The current location of Riverhead Schools District Office is the site of the former Wivchar Stadium on Osborn Avenue. It’s also the field where baseball legend Satchel Paige pitched on July 21, 1950 when he played for the Philadelphia Stars, a semipro barnstorming team.

“This is a very unique location in Long Island sports history,” said Chris R. Vaccaro, executive director of the Suffolk Sports Hall of Fame. “Satchel Paige is an icon and to associate him with Suffolk County sports and remember the location where he entertained a local community of hardworking citizens is exactly why we put up historic markers. We must continue to research, uncover and remember the people and places who came before us so that future generations can learn and grow.”

Also at the game that day was Carl Yastrzemski Jr., a 10-year old bat boy for the Riverhead Falcons, a team his dad, Carl Sr., played on.

Special thanks to Fabio Montella, an assistant professor of library services and history for Suffolk County Community College’s Eastern Campus in Riverhead, for doing the baseball and historic research that led to this marker being placed.

Joining Vaccaro and Montella were members of the Riverhead Schools administration, board of education and various levels of baseball players from Riverhead, who now play their games on the same piece of property the stadium once stood.

This is the third historic marker for the Suffolk Sports Hall of Fame. The first was placed in 2019 at the home of the Long Island Ducks baseball franchise, the longest running pro sports facility in the county and the second went up in April 2022 to recognize the location where Yastrzemski played high school baseball in Bridgehampton.

“We’re just getting started with this marker program,” said Vaccaro. “We have at least one dozen other locations across the county that we’re eyeing to honor in the years ahead.” 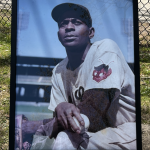 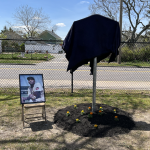 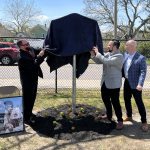 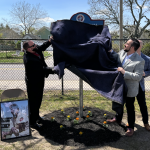 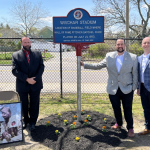 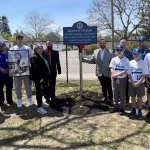 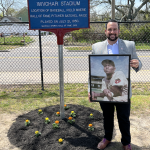 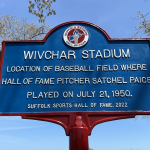 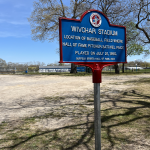