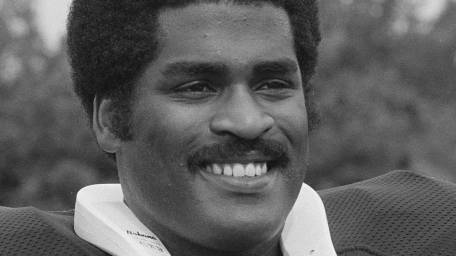 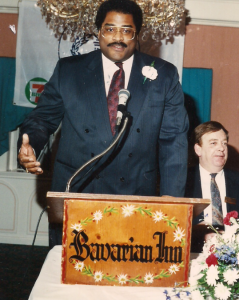 Jiggetts was born in Brooklyn, but grew up in on Long Island when his parents moved there soon after he was born. Excelling in both academics and athletics at Westhampton Beach High School, Jiggetts ranked in the top 10% of his class academically, earning a Rotary scholarship for college and was elected class president each of his four years of high school as well as earning eleven varsity letters in three different sports.

He was extremely popular, noted a high school friend from Quogue, former United States Congressman Michael P. Forbes, who graduated a year earlier in 1971. Jiggetts was named a high school All-American defensive end, and also won the New York state regional championships in both the discus and shot put.

Jiggetts was heavily recruited out of high school for football. He signed a national letter of intent to go to Ohio State and play for their coach Woody Hayes, but eventually changed his mind and decided to enroll in Harvard instead in order to keep a promise he made to his mother who died four days after his high school graduation. 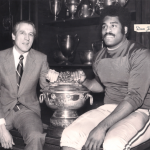 Playing offensive tackle for Harvard, Jiggetts was named All-Ivy League three times and All-East twice as well as All-American by both the AP and UPI during his senior year in 1975. Named captain of Harvard’s 1975 football team, he was not only the first African American to be honored as such, but he also helped lead the team to its first undisputed Ivy League Championship. Considered to be one of the finest lineman in the history of the league, Jiggetts was named to the Ivy’s Silver Anniversary All-Star Team and was inducted into the Harvard Varsity Hall of Fame. After graduating, Jiggetts was drafted in the sixth round of 1976 NFL Draft by the Chicago Bears.

Jiggetts played 98 games as a backup offensive lineman for the Bears from 1976 to 1982. Released by the team during the 1983 preseason, Jiggetts went on to play one season each for the Chicago Blitz and San Antonio Gunslingers in the USFL before retiring in 1985.

During his playing career, Jiggetts was active in player-management labor relations in both the NFL and USFL. He served as a player representative for the Bears and was the vice-president of the National Football League Players Association at the time of the 1982 strike. Jiggetts was also involved in attempts to unionize USFL players as a member of the Blitz.