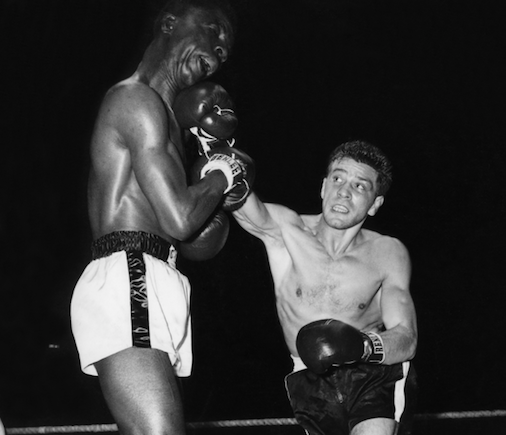 Miceli grew up on New York’s lower east side, where in the neighborhood, the law of survival was the only law rigidly enforced. At 17, Joe turned to fighting to defend himself.

He turned professional in 1948 and compiled a record of 60 wins, 42 losses and 8 draws. Of his 110 fights, 37 were televised (3rd most televised boxer of the 1950s) and he was the one of the most popular fighters of boxing’s television era.

Miceli became known for his vicious left hook as a southpaw in the ring. He fought 12 world champions, but never fought in a championship bout. He was ranked in the welterweight top 10 from 1950 to 1956, but was never granted a world title fight. He blames nobody but himself because he didn’t train properly.

He lives in Brentwood and is a very active member of Ring 8, New York City’s chapter of the Veterans Boxing Association. In 2000, he was honored by the association as an uncrowned champion, presenting him with the distinguished belt. In 2002, he was inducted into the New Jersey Boxing Hall of Fame.