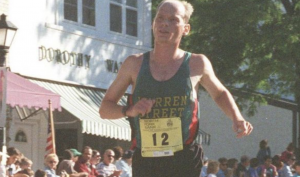 Pat Petersen, also a member of the Farmingdale State Athletic Hall of Fame who had three top-four finishes in the New York City Marathon in the 1980s, died at the age of 55 in 2015.

Known for his unorthodox running form of flailing arms and swaying shoulders, Petersen briefly held the U.S. record — his personal best — of 2 hours, 10 minutes and 4 seconds at the 1989 London Marathon.

Born legally blind in one eye and diagnosed during the end of his professional running career with an irregular heartbeat, he worked full time in finance — including on Wall Street and as an analyst at Grumman in Bethpage — while training up to 100 hours weekly and chasing dreams of competing in the Olympics. He also worked at Dowling College.

He told Newsday in 1987: “I don’t consider myself a really great runner. I shine in New York, compared to the other marathons I run. I beat people in New York that I don’t beat anywhere else. This is the one I live for.”

Gary Muhrcke, who won the first NYC marathon in 1970 and founded the Huntington running store Super Runners Shop, said Petersen was “without a doubt — he was one of the best marathoners in the country. . . . He was the best American marathoner after [Alberto] Salazar.”

Petersen, as a high school student, bought his first pair of running shoes at the shop. Muhrcke went with Petersen to Los Angeles in 1984 for the Olympic trials, where he didn’t try for the marathon, but instead opted for the track and field trials. He finished 17th in the 10,000 meters.

“Pat Petersen had character,” said Sundlun, co-founder of the Rock ‘n’ Roll Marathon Series. “He wasn’t full of himself. When he set that American record, he worked all day at Grumman, got on a plane, landed in London . . . ran 2:10:04 and got back on a plane and was back at work.”

Patrick James Petersen was born Dec. 3, 1959, in Rockville Centre. He grew up in Oceanside and Ronkonkoma. He graduated from Islip High School in 1977 and was a standout runner at Farmingdale State College and Manhattan College in the Bronx, graduating in 1981.

In his 1983 debut at the New York marathon, he ran 2:12. For part of his career, he was sponsored by adidas. He married fellow runner Bea Huste-Petersen, whom he met at the Warren Street Social & Athletic Club, on Jan. 18, 1992. The couple had four children — two of whom have autism. In 2006, the Petersens started the EJ Autism Foundation, which raises money for programming at schools for children with autism.

Recalling his “horrendous, terrible running form,” with a laugh, Petersen’s wife said his “major strategy” was to tire out the competition.