UPDATE: Due to recent events related to the international health crisis, the induction ceremony will now take place on October 1, 2020!

The Suffolk Sports Hall of Fame has officially announced its Class of 2020 and inductees will be honored in a ceremony on October 1 at Watermill Caterers in Smithtown. The Hall of Fame is celebrating its 30th Anniversary in 2020.

“This is a very special year for the Suffolk Sports Hall of Fame,” said Chris R. Vaccaro, Executive Director of the Hall. “We are celebrating a major anniversary, while honoring an all-star induction class. These are some of the finest individuals to represent not only Suffolk County, but their respective sports and organizations at-large.” 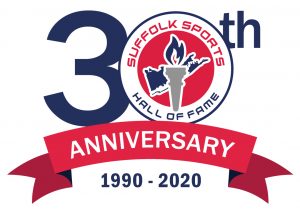