Sue Wicks is the all-time best women’s basketball player in Rutgers history. The school honored her with a Sue Wicks Day celebration in November and they beat NJIT 87-71 to cap off the moment.

She was inducted to the Suffolk Sports Hall of Fame in 1991. 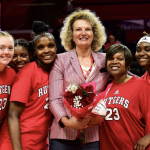 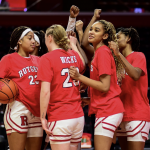 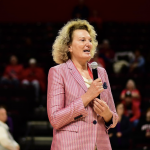 Wicks became the second former player to have her jersey retired when she was honored April 26, 1998. She is the only RU player to garner three Kodak All-America honors and three Atlantic 10 Conference Player of the Year awards. Wicks was named the National Player of the Year in 1988 by Naismith, the U.S. Basketball Writers Association, the Women’s Basketball News Service and Street & Smith’s. Rutgers posted an impressive 105-21 (.833) record and advanced to the NCAA East Regional final twice during Wicks’ career.

She was inducted into the Rutgers Women’s Basketball Hall of Fame in 1994, the first year she became eligible, and still holds the career record for points, male or female, at Rutgers with 2,655 tallies. In all, she still holds eight Rutgers career records over three decades after her playing days ended and her 1987-88 single-season totals in points (793), field goals made (319), free throws made (155) and scoring average (25.6 ppg) still top the RU charts.

Wicks became the first Rutgers women’s basketball player to be drafted by an American professional basketball league when she was the first-round draft choice of the New York Liberty in the inaugural WNBA Draft in 1997. She also played in the first-ever WNBA game as a member of the Liberty, facing the Los Angeles Sparks on June 21, 1997. Wicks returned to the States after playing overseas for eight years.