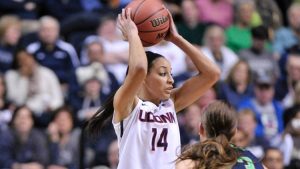 The North Babylon native and WNBA start was inducted to the Suffolk Sports Hall of Fame in 2019.

American professional basketball player for the New York Liberty of the Women’s National Basketball Association (WNBA). She was drafted 7th overall by the Seattle Storm in the 2014 WNBA Draft and was immediately traded to the Washington Mystics. Hartley played point guard for the UConn women’s basketball team, and won back to back national championships in 2013 and 2014.

Hartley was four-year varsity basketball letter winner at North Babylon High School in North Babylon, New York, where the Bulldogs had a combined record of 81–13 and a record of 46–1 in the league play. Hartley began playing with North Babylon’s varsity squad as an eighth grader. During her junior year, she averaged 21 points, 7.4 rebounds, 7.2 assists, 6.0 steals and 4.7 blocks per game and was named to the Parade All-America list. As a senior, she had five triple doubles, and averaged 30 points, 8.3 rebounds 7.4 assists, 5.9 steals and 5.0 blocks per game, and lead her team all the way to the title game, where Hartley poured in 51 points, but it wasn’t enough to overcome a balanced attack by Sachem East. She was named the New York Newsday’s Long Island Player of the Year and New York’s Miss Basketball in 2010 by the New York Basketball Coaches Association. Hartley amassed 1,978 points in five varsity seasons. 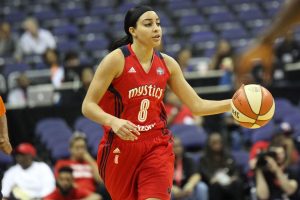 In her final year at UConn, she had an amazing senior year as she was a candidate for the Nancy Lieberman Award as the nation best point guard. She played and started in all 40 games, scoring in double-figures in all but four contests, second on the team at 16.2 points per game and 4.3 assists per game. Hartley scored at least 20 points 12 times and notched a season-high 30 points on 11–15 shooting, including 6–8 from deep, in the win at Rutgers and scored at least 20 points in a career-high four-straight games from February 22 – March 1. Hartley was named to American Athletic All-Conference Tournament team after averaging 15.8 points and 4.0 rebounds per game while dishing-out a team-best 20 assists against only eight turnovers over three contests. She helped lead her team to an undefeated 40–0 season and won the 2014 National Championship, and was named to the 2014 NCAA Final Four All-Tournament team for the second-straight year, after averaging 14.7 points per game while dishing out 3.9 assists and burying a team-high tying 13 three-point field goals in UConn’s six victories and was later inducted into the Huskies of Honor on senior night.

Hartley led UConn to a 144–11 record over her four-year career, which included four Final Four appearances and back to back National Championships. One of only two Huskies, along with Maya Moore as the only players with 1,500 points, 500 rebounds, 500 assists, and 200 steals. She finished her career in eighth place on the UConn scoring list with 1,994 points 6 points shy of 2,000, sixth all-time with 259 made three-point field goals and 153 games played, fifth in school history with 559 assists. A two-time All-Conference First Team selection, Hartley scored 647 points in 2013–14 marked the fourth-most scored by a UConn senior in program history and her 173 assists also marked the fourth-highest total for a UConn senior. She earned a reputation for playing her best in big games and was selected to the All-NCAA Tournament Team in 2013 and 2014, the NCAA Tournament All-Regional Team in 2011 and 2014 and to the All-Conference Tournament team in 2011, 2012 and 2014.

Hartley was drafted seventh overall in the 2014 WNBA Draft by Seattle Storm then later traded to the Washington Mystics who drafted UConn teammate Stefanie Dolson. Hartley started in her second game of the season as she had team high 15 points and dished out 5 assists vs Indiana Fever on May 23, 2014. On June 1, 2014, in the triple-overtime game vs the Los Angeles Sparks, the UConn duo of Hartley and Dolson combined for 34 points coming off the bench and Hartley scored her first 20-point game. On June 24, 2014, vs Seattle Storm Hartley scored career-high 26 points going 11–16 from the floor, including 4–6 from three-point range. She suffered a broken left middle finger in a game against the Seattle Storm in a loss.

In January 2017, Hartley was traded to her home state team, the New York Liberty in a three-team trade deal that sent teammate Kia Vaughn also to the Liberty, Carolyn Swords along with the 15th overall pick in the 2017 WNBA draft to the Seattle Storm and the Mystics receiving the Storm’s first and second round draft picks in the 2017 WNBA draft. On May 13, 2017, Hartley made her Liberty debut and recorded 3 assists and 4 rebounds in 18 minutes of play in a 73–64 win over the San Antonio Stars. On June 16, 2017, Hartley scored a season-high 17 points in 102–93 win over the Dallas Wings. The Liberty would finish the season on a 10-game winning streak and the number 3 seed in the league, receiving a bye to the second round. In the second round elimination game, the Liberty were defeated by the Washington Mystics 81-69, Harltey scored 15 points in the loss.

In February 2018, Hartley re-signed with the Liberty. In 2018, the Liberty would have a disappointing season as they missed out on the playoffs with a 7–27 record.

Hartley headed west in 2020 signing as a free-agent with the Phoenix Mercury of the WNBA.