Baseball pioneer Henry Chadwick was inducted to the Suffolk Sports Hall of Fame in 2021. The Hall of Fame plaque was officially presented in Sag Harbor prior to the Hamptons Collegiate Baseball League game on Monday, July 4, 2022.

Chadwick, known as the “Father of Baseball,” spent decades residing in Sag Harbor. It is believed that he watched games at Mashasimuet Park, where the plaque was presented by Suffolk Sports Hall of Fame President Chris R. Vaccaro.

“So many things associated with baseball that we take for granted were developed by Henry Chadwick,” said Vaccaro. “To honor him 150 years later in the place he called home while young players put on a show at the ballpark and while we celebrated our nation’s independence was a perfect moment of Americana.”

He is most known for creating the box score, the K for strikeouts, developing the formula for batting averages and ERA, among many things that still live on in the game today. For his vision and work he was inducted to the National Baseball Hall of Fame in 1938.

Jack Young, former Sag Harbor Historical Society President, accepted the honor from Vaccaro. He was joined by Bethanie Deyermond, a trustee of the historical society, and Nancy Benvent, a trustee of Mashasimuet park.

The plaque will likely remain at the park, which is set to undergo renovations to the historic grandstands and adjacent buildings in the near future. 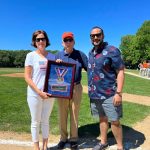 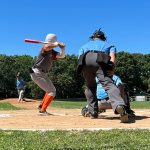 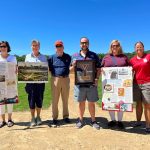 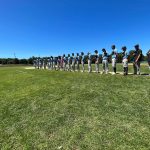 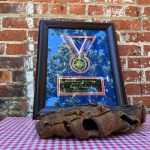