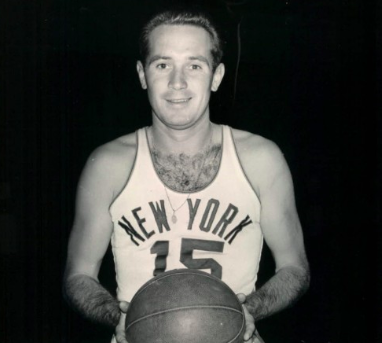 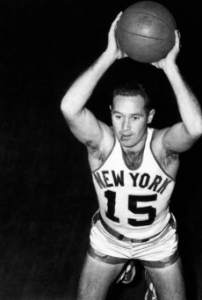 McGuire spent eleven seasons in the NBA (1949-60) and was one of the premier guards of the 1950s. He played eight seasons with the New York Knicks and three with the Detroit Pistons.

In his rookie season, McGuire led the league in assists and was among the league’s top ten playmakers for ten of his eleven seasons. His 386 assists as a rookie was a record at the time. He was selected to the All-Star team seven times and was named to the All-NBA Second Team in 1951.

Four years after his retirement, Dick’s son Scott was born. Scott had played basketball at Suffolk Community College and then at St. Joseph’s College. He also worked as an executive for the New York Knicks. This was a dream come true for him, as he had a job working for the team that he rooted for as a child.

The Knicks retired number 15 a second time for Dick in 1992 (it had been retired for Earl Monroe six years earlier).

Finally, Dick McGuire was inducted into the Naismith Memorial Hall of Fame in 1993. Other notable players who were inducted that year included Julius Erving and Bill Walton.

On February 3, 2010, McGuire died at age 84 while working as a senior consultant for the Knicks. 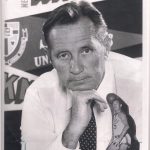