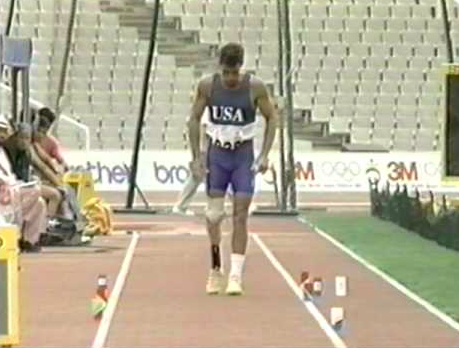 Dennis Oehler is a paralympic athlete from the United States competing mainly in category PS4 pentathlon and TS2 sprint events. He graduated from Deer Park in 1978.

In 1984, three weeks before he was to sign with a professional soccer team, he was hit by a car and his right leg had to be amputated below the knee. Oehler became depressed and uncertain with what his future would hold. Months later, his friend took him to watch the Paralympic Games. Oehler was inspired to once again, be a competitive athlete.

He then went on to become a world class runner, and earned the tittle “Fastest Leg Amputee in the World”.  By 1988 his 100 meter time was 11.73 seconds, which is only 1.7 seconds slower than Carl Lewis’ fastest 100 meter time.  He is a motivational speaker and he now lives in East Hampton.

Dennis competed in three Paralympics for the United States winning a total of 10 medals including four gold. At his first games in 1988 he won the 100m, 200m and 400m all in new world records, he also helped the United States team to win the bronze medal in the 4 × 100 m.

At the 1992 Summer Paralympics Dennis didn’t compete in the 400m and was unable to defend his titles in the 100m and 200m finishing second and third respectively he did however win a gold medal in the long jump in a new world record, he also won silver in the pentathlon and as part of the United States 4 × 100 m relay team. His third games came in his home country for the 1996 Summer Paralympics where he competed in the 100m and long jump and won a bronze medal in the 4 × 100 m.