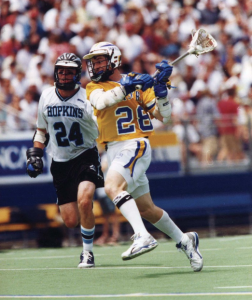 Doug Shanahan is one of the greatest two sport athletes to ever play at Sachem as well as Hofstra University (1997-2001) in football and lacrosse. His No. 26 was retired at both schools for lacrosse.

At Sachem, he was an All-American in lacrosse and helped the football team win county championships is 1995 and 1996.

At Hofstra, he was a three-time All-American in football and lacrosse, and winner of the Tewaaraton Trophy, given to the top lacrosse player in the nation.

He was drafted by the Bridgeport Barrage first overall in the 2002 MLL Supplemental Draft. He played with Barrage through the 2005 season, helping the Barrage capture the 2004 Major League Lacrosse Championship. He was acquired by the Chicago Machine in the 2006 Expansion Draft (1st round, 4th pick) from Philadelphia.

Shanahan also played a half season during the New York Saints last year of the National Lacrosse League in 2002, where he recorded 7 goals and 4 assists in 8 games.

Shanahan lives in South Florida where he coaches lacrosse exclusively.

In 2019 he was named associate head coach of Team England Lacrosse.

He is also an inductee of the Sachem Athletic Hall of Fame and Long Island Metropolitan Lacrosse Hall of Fame.