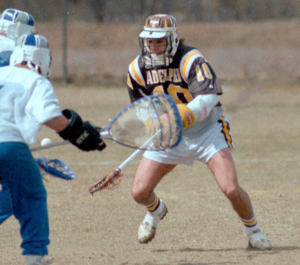 Older brother, by only 14 months to Jeff, Scott had his own outstanding career in lacrosse and soccer at Rocky Point.

In lacrosse, he set state records for assists and goals scored, won the Ray Enners Award, given to the top player in Suffolk County, his senior year and was Rocky Point’s first lacrosse All-American.

In his senior year, he scored 55 goals and added 99 assists to have one of the best single seasons in NYS history. He was voted Athlete of the School in both his junior and senior years. 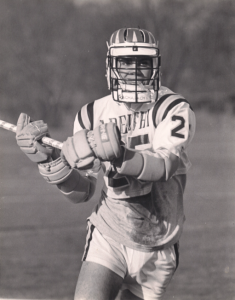 Like Jeff, he played lacrosse at Adelphi University, where he was the school’s first two-year captain, led the team in assists for three consecutive years and holds numerous scoring records. He led the team to a No. 3 ranking in the nation when it was still competing at the Division I level.

He finished his career at Adelphi ranked second in all-time assists and is ranked in the top five in points and ground balls. He is also a member of their Hall of Fame.

After college, Scott was a grad assistant at Stony Brook University. He then went on to coach football, soccer and lacrosse in New Hyde Park, and he became the first full-time athletic director in the Mount Sinai School District in 2000. He supervises a comprehensive program at the high school and watches over 63 athletic teams throughout the district,  a job he still holds today.

In 2018 he was named New York State Athletic Director of the Year.