Before beginning his career an official in the 1960s, Shelley was an outstanding runner in the 1940s at Bishop Loughlin Memorial High School in Brooklyn. He was one of the best 400 meter runners in the country, and during his senior year, he was part of 2 All-American victories.

In 1947, Bill anchored his school’s mile relay squad to the National Indoor High School Championship at Madison Square Garden. One month later, he again anchored the winning team to the One-Mile Relay Championship of America at the Penn Relays. 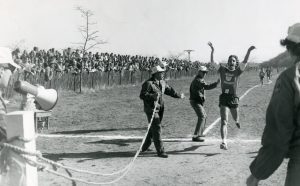 Shelley attended Villanova on a full track scholarship, where he ran for the great Jim Elliott.

In 1964, he became a charter member of the Suffolk Track Officials organization.  Some highlights of Bill’s career are as follows:

Bill was the coordinator for all cross-country activities at Sunken Meadow State Park. He planned on serving there for 5 years but stayed for 20, from 1983 to 2002. In an unprecedented gesture, the Suffolk Track Coaches Assoc. honored him by erecting a permanent cross country scoreboard bearing his name at the park and also with a retirement dinner in 2002.

In the spring of 2003, at the age of 74, he served as chief referee at the Suffolk County track & field championships and as chief clerk of the course at the State qualifying meet. Now in the twilight of his career, Bill continues to be requested by meet directors in all of Suffolk County on a regular basis. His respect among the coaches is in a league by itself.

Bill has been married to his wife, Anne, for almost 53 years and they have 3 children and 5 grandchildren.