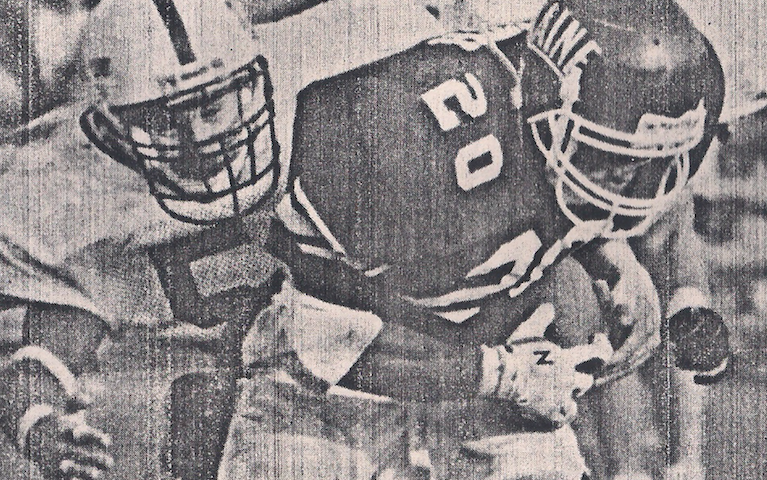 Carl Smith was an outstanding football and track star during his time at Riverhead High School.

At 8 years old, he tried out for a Pop Warner football team and was the last pick in the draft. During practice, Smith was a punt returner and shocked everyone as he dodged tacklers and ran the ball back for a touchdown. This was done two more times and from that moment on, a star was born.

At 13 years old, Smith was diagnosed with asthma, but medication kept this from interfering. He overcame this to the point where his high school teammates were unaware of the condition.

During his high school football career, Smith played tailback and used his dominant speed to his advantage. Surrounded by talented offensive lineman and fullbacks, they also gave him an advantage against the defenses. However, once Smith was able to get a step ahead of the defenders, no one would be able to catch him. This speed attracted the attention of Syracuse University and the University of Maine.

This speed also paved the way for an outstanding track career where he had many accomplishments and set a school record at the time in the 200 Meter Dash with a time of 21.5 seconds.

In his senior year, Carl faced a major challenge. During the opening game against Amityville Memorial High School, he landed on his left shoulder when being tackled and it separated. After being benched, he made his return to the field while wearing a harness. This prevented the use of his arm, but he continued to dominate the field. However, Syracuse backed away from Smith after the injury, but Maine continued to pursue him.

After graduating in 1987, Smith attended the University of Maine where he played football and ran track. He immediately made his mark on the field when he came off the bench as a red-shirt freshman and scored four touchdowns against the University of Massachusetts.

During his sophomore year, Smith led the nation in rushing yards and touchdowns. He also led Maine to a Yankee Conference title and set many school records in the process. Smith also was named All-American.

That same year, Sports Illustrated that 13 different National Football League teams had sent scouts to the University of Maine to look at Smith.

While the numbers that Carl set in football are impressive, they did not come without consequences. All of the running that he did caused injuries to his knees.

After graduating college in 1991, the Philadelphia Eagles invited Carl Smith to their minicamp where he met big names such as Reggie White and Randall Cunningham. However, Smith was   tackled by Andre Waters and Seth Joyner which showed him what it felt like to be tackled by a professional. Smith also made an appearance to the rookie camp, but did not receive a spot. Instead, the spot was given to Herschel Walker.

In 1993, Smith tried out for the Toronto Argonauts of the Canadian Football League, but did not make the cut due to not preparing well enough for the tryout.

At 26 years old, Smith decided that he was finished playing football.

Currently, he coaches at the high school level in Maine.