Tice is a retired NFL coach. He played football at Central Islip High School, graduating one year earlier than his brother, John. He was the team quarterback, and winner of the Hansen Award and a member of the All Star team in 1976.

He also played at the University of Maryland, and was their passing leader in 1979 & 1980. He became a free agent with the Seattle Seahawks in 1981 and stayed with them until 1988. He had a 14 year career in the NFL, before starting his coaching career.

Immediately following his retirement, Tice joined the Minnesota Vikings’ coaching staff, serving first as the tight ends coach (1996) and offensive line coach (1997-2001). He took over head coaching duties for the final game of the 2001 season and was later named the head coach in early January of 2002.

He was an offensive line coach for the Atlanta Falcons (2014) and the Oakland Raiders (2015-17) until his retirement. 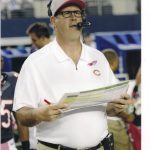 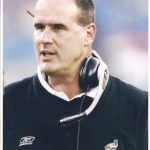