Thieben is a retired professional basketball player. A native of Suffolk County, he attended Sayville High School from 1948-52 and was part of the basketball team. On February 26, 1952, he scored a school record 48 points against Northport.

He enrolled at Hofstra University and became eligible to play on the basketball team during his sophomore year (1953-54). Standing at 6-foot-7 and weighing 215 pounds, Thieben is considered the first “big man” in Hofstra basketball history. He averaged 24.6 points and 25.8 rebounds per game that season, and averaged 29.2 points and 24.4 rebounds the following year. Look magazine named him an All-American at the end of his junior season.

In his senior season, Hofstra had become a classified D-I institution. In 26 games played, he averaged 26.9 points and 24.2 rebounds per game and repeated as one of Look‘s All-American selections. He was also selected as the Haggerty Award winner, which is an annual award given to the top male collegiate basketball player in New York City’s metropolitan area. Thieben was the first Hofstra player to receive the award.

In 1956, Thieben graduated with a B.A. degree in History and Political Science.  After his sensational college career, the Fort Wayne Pistons (later became the Detroit Pistons) selected Thieben in the NBA Draft that same year. His career ended two years later.

After his NBA career, Thieben became a history teacher at Bay Shore High School.  In 1961, he was appointed as the Assistant Principal due to his ability to connect with the students.  He held this position until 1971 when he was offered the position of Principal of Rocky Point High School.  In 1994, Thieben retired from the public school system.

Additionally, Thieben showed his passion for education as he serves as an Adjunct Professor of Sociology and History in 1981 for multiple colleges on Long Island and a full time Professor of Secondary Education at St. Joseph’s College.

In 2000, students who attended Bay Shore High School in the 1960s joined together to honor Bill Thieben by unveiling a plaque to commemorate him that states, “William B. Thieben-The voice that launched a thousand school days remains forever in our hearts.”

Thieben was always known to lend a helping hand to his students which inspired his William B. Thieben Scholarship Fund.  This is an annual award that is given to a senior graduate who is in need of a helping hand. 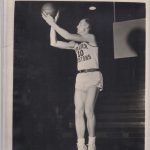 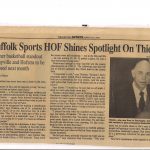