Whalen graduated from Harborfields High School in 1994, where she played varsity soccer, basketball, and track as a sprinter.

She went on to attend the University of Connecticut to continue playing women’s soccer; she was a defender and forward and earned All-American honors three times, 1997 D-I Player of the Year, and was named to Soccer America’s Collegiate Team of the Decade for the 1990s. Whalen was the 1995 and ’96 Big East Defensive Player of the Year, before playing striker her senior season where she recorded 21 goals and 22 assists to lead her team in scoring. Her jersey is retired by the team (#8). 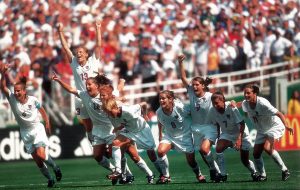 She is a member of the winning 1999 U.S. Women’s World Cup Team and the 2000 Olympic Silver Medalist Team.

She was drafted by the New York Power (women’s professional soccer league) to start play in 2001. After suffering an ACL and MCL tear in a 2002 game, she suffered an allergic reaction to one of the screws within the ligament of her knee, which nearly killed her. She had a total of seven surgeries just to fully repair the injury. This marked the end of her professional soccer career.

In 2004, after the numerous surgeries, she ran the New York Marathon in 4 hours 19 minutes 38 seconds.