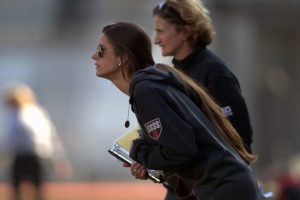 She went on to play lacrosse at Notre Dame, where she was a four-time All-American and still holds several records at the school.

A 2009 Tewaaraton Trophy finalist and team captain, she produced a historic playing career at Notre Dame, where she graduated as the all-time leader in goals (262), points (336) and draw controls (154). A four-time IWLCA All-American and 2009 Honda Award finalist, Byers wrapped up her collegiate playing days fourth in NCAA history in career goals and 10th in points.

After her league-record 78 goals in Big East Play to be named Big East Attack Player of the Year, Byers was voted the second runner-up for Notre Dame’s Female Athlete of the Decade Award. A two-time Big East Academic All-Star, Byers graduated from Notre Dame in 2009 with a Bachelor of Arts in film, television and theatre.

A four-year member of the U.S. Women’s National Lacrosse Team, she competed with the best players in the world.

Jill advanced her career in the game as a coach, first as an assistant at Yale in 2009 and continued at Notre Dame and Stony Brook University through 2014.

She is currently coaching at Ohio State University.