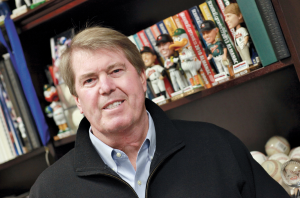 Frank Boulton graduated from Bay Shore High School in 1969 and Villanova University in 1972 and went on to have a 23-year career on Wall Street.

Always an avid baseball fan, Frank owned three farm teams, two affiliated with the Yankees and one with the Kansas City Royals.

He is responsible for bringing minor league baseball to Long Island with his Long Island Ducks, who debuted in 2000.

He is also the founder and CEO of the Atlantic League of Professional Baseball Clubs and principal owner of the Long Island Rough Riders soccer team. Driven by a sense of gratitude, hard work, and dedication, Frank has been involved with many local charities. Frank served as Chairman of the Great South Bay YMCA Board of Managers from 1983 to 1992. He was a Great South Bay YMCA board member for 27 years. Frank also chaired the capital campaign that raised $6.2 million dollars to construct the YMCA. In 1992, the Board of Managers named the gymnasium in his honor.

Frank and Karen Boulton purchased the old Regent Theatre and then donated it to the Great South Bay YMCA. The Boulton Center for the Performing Arts recently celebrated its tenth anniversary and is a point of pride in the downtown Bay Shore community.