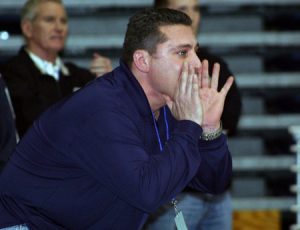 Nick Garone began wrestling at the age of 12, winning medals, trophies and special awards in every competition he entered.

He attended Patchogue-Medford High School where he was a league champion, Section XI champion, New York State champion and an All-American selection his senior year.

In 1992, he pursued his dream to be an Olympian and was named the Eastern Olympic Games Qualifier champion. Unfortunately, at the final Olympic trials in Barcelona, where he was undefeated, he had to default back to fourth place due to an injury.

Nick returned to Syracuse to get his Master’s Degree and he was the assistant coach of the wrestling team. He stayed on until 1993 then moved on to an assistant coaching job at Georgia State University, where he stayed until 1996.

He is presently the head coach of the boys’ wrestling team at Eastport-South Manor High School, where he has been building a successful program since 2005.

In 2018, he was inducted to the Patchogue-Medford Hall of Fame.