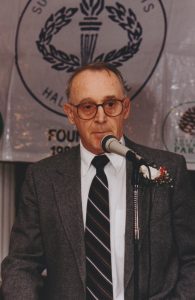 Moved to Long Island when he was 14 years old.  Began wrestling when he was 17 in Huntington and was their first county champ.

He married after high school and went to work for Grumman, but he never gave up his dream to wrestle in the Olympic Games.  In 1956, three years after high school, he finished fourth in the U.S. Olympic qualifying tournament and was the alternate on the 1956 team.

In 1959 he earned a spot on the U.S. team for the Pan Am Games and won the Gold medal.  He made the 1960 Olympic Team, achieving his dream,  but a mastoid infection kept him out of the games.

He went on to become an outstanding and legendary coach at Huntington, his alma mater.

Giani’s Huntington teams have won New York State Intersectional Tournament championships.   In 2002, Huntington became only the fourth team in the 43-year history of the state tournament up to that point to have three state champions in one year.  Since 1990, Huntington has had 29 individual Suffolk champions and 13 second place finishers.

After a 19-year career with the Grumman Aerospace Corporation during which Giani rose to Group Leader on the Lunar Escape Module (LEM) project for NASA, he took on teaching and coaching and has left a trail of greatness. He was the first Suffolk County champion from Huntington High School, his son, Lou, Jr., was Huntington’s first state champion and his other son, Joseph (now a Huntington assistant superintendent) was the school’s first NCAA mat champion. 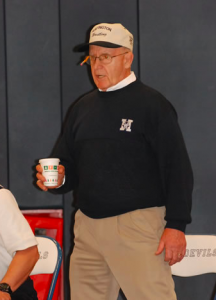