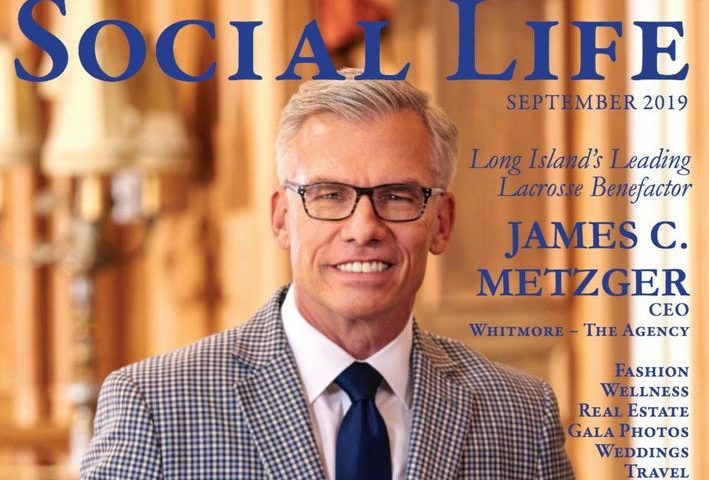 The cover story of the September issue of Social Life magazine features the generous philanthropic contributions of Suffolk Sports Hall of Famer James C. Metzger, the founder and CEO of Whitmore – The Agency. Headquartered in Garden City, the insurance brokerage is one of the leading insurance firms in the New York City area.

The September issue focuses on Metzger’s ongoing support for Long Island boys’ lacrosse programs and his contributions to other local and national sports programs and causes. Metzger is a former All-American lacrosse player at his Suffolk County high school and Hofstra University.

Each year, Metzger presents many awards to successful scholar-athletes who play lacrosse on Long Island:

Metzger and his company also support The National Football Foundation New York Chapter presentation of the Mr. Football New York City Player of the Year Award (for the outstanding high school player) and the Citizens’ Committee for Children of New York that is a child advocacy organization.

Elsewhere in the Social Life issue are features about Rob Pannell, New York Lizards lacrosse star and Metzger’s nephew, and Frank Russo, a Whitmore insurance client who owns Russo’s On the Bay in Howard Beach, Queens.

“From Smithtown Good…To Global Great – The Journey of Rob Pannell” explores the athlete’s journey from Smithtown High School to Cornell University, where he received many national awards that included best college lacrosse player. He has starred for the Lizards and Major League Lacrosse for seven seasons.

“The Game of Life…and Playing For Keeps – Team Russo at Russo’s On The Bay” indicates that the success at Russo’s, along with Vetro Restaurant & Lounge and Russo’s On The Bay Gourmet, has been achieved with hard work, trust and loyalty. The article features eight employees who have 215 combined years of service at Russo’s.