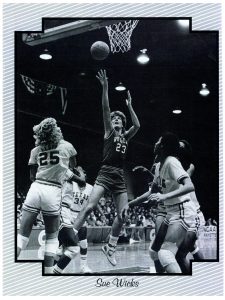 She played for Rutgers University from 1984-88 and was named a Kodak All-American in 1986, ’87, and ’88. She won the Naismith, U.S. Basketball Writers Association, Women’s Basketball News Service and Street & Smith’s National Player of the Year awards in 1988.

The scoring and rebounding totals are records for a male or female player at Rutgers. In 1998, she became only the second Rutgers basketball player to have her jersey (#23) retired. She was inducted into the Rutgers Basketball Hall of Fame in 1994.

She was a gold medalist in the 1987 Pan-American Games and played professionally in Italy, Spain and Israel following her college career before the WNBA was founded.

Wicks played in the WNBA for 5 seasons and retired in 2003 when she was a member of the New York Liberty. She was named to the 2000 All-Star team and finished her career as the number eight leader of all time in shots blocked.

In June of 2004, she was named Coordinator of Basketball Operations for the Rutgers University women’s basketball team.

In 2013, she was inducted into the Women’s Basketball Hall of Fame.